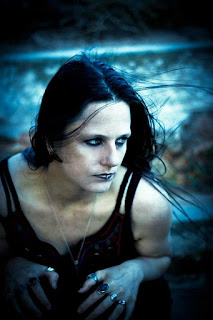 This week was rather challenging, as it saw my return to the day job, which just further underscores that at some point I need to break out of that horror novel that is working for a newspaper publisher. It's not always easy following one's dreams and I often wonder what "regular" folks do for fun 'cos there's rarely a moment when I'm not behind a computer.
And yes, I get tired. Very, very tired. I don't see myself laying out advertorial and subbing advertising-related copy for the rest of my life. My "night job" as I call my work for Lyrical, as well as my writing, is really what I want to do, but yeah... If I like my little luxuries like a roof over my head and food in my belly, I have to make sacrifices.
A big thank you to my dear husband, Thomas, who helped me with my promo photos last Sunday. He's a very talented visual artist and film director, and if dark arts are your thing, do stop by his deviantArt page.
But enough of the banter. I've had a number of ace appearances this past week:
I celebrated release day for What Sweet Music They Make on Monday. Things were kept very low-key with a bunch of my friends meeting up at Roxy's on Dunkley Square. Yes, I made a speech. A very quick one... Then had chocolate brownies. Many thanks to everyone who attended.
After that, it was a brief stop by Tombstone Tails to chat with Psynde about What Sweet Music They Make. Psynde delivers some great content on her blog and is definitely one I enjoy following.
For those of you who love the idea of immortals in fiction and film, I discuss functionally immortal characters on Autumn Christian's blog. This was a fun post to write and I've had some great feedback from it.
Then the last big 'un for this week was my debut appearance on The Word Fiend's blog. She interviews me and we discuss my latest release, plus there was a giveaway.
And if you missed it, I wrote my first piece of flash fiction in ages. Jamie fans of my Khepera books will be happy to see our friend up to his usual antics.
I'm also rather excited (and nervous) about a call for submissions I heard about yesterday because I have a concept and I'd like to give it a try. I did the Angry Robot open door call for subs last year. I got one really good novel out of the effort which I eventually subbed and had contracted to Dark Continents Publishing. This year I'm trying my hand at YA secondary world fantasy. Bearing in mind it's secondary world fantasy that was one of my biggest influences when I was growing up... It's odd that I haven't pushed hard to get one published, as I do have one languishing on my hard drive.
Speaking of novels languishing on hard drives, I had Camdeboo Nights contracted to Lyrical Press. It is a YA urban fantasy novel I wrote about two or so years ago that stalled mainly because it sat for months with a literary agent then later for months with another publisher that had requested a full submission. I'm yet to confirm release dates but in the meanwhile I'm just happy the tale will now see the light of day.
Posted by nerinedorman at 8:54 PM