In the novella High Tower Gods CL Corona creates a wonderfully nuanced and encapsulated story that expertly captures the turning point in a society heavily reliant on a created slave-race of AIs. I'm a huge fan of secondary worlds that are recognisably modernised, and in High Tower Gods, we have a world filled with motor vehicles, intelligent biomechanoids, rampant alchemy and magic. Part whodunnit, part laying to rest of old demons, the story follows the immortal Elian as she works to prove the innocence of a chimera accused of murder – an act she believes the creature incapable of committing. And she would know, because she was responsible for encoding the inability to kill.

Elian has lived in isolation in her tower for so many years that she's cut herself off from an indolent society that is over-reliant on a slave-race of chimeras to do all the work. And her actions are about to have unforeseen, unexpected repercussions.

But I won't spoil. This is a beautiful, lush and layered story, especially suited for those of us who're looking for short, standalone fantasy reads. As alway, Corona's writing is vivid, focusing on the uncomfortable exchanges between people who have a lot of water under the bridge.
Posted by nerinedorman at 5:14 AM No comments:

Cat among the Pigeons by David Muirhead 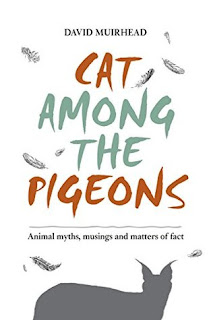 Cat among the Pigeons by David Muirhead is the quirky, fun kind of book that I'd happily gift to my dad to read. Muirhead's collection of short, humorous musings about assorted species such as killer whale, caracal, elephant, gorilla, gemsbok, and rain frog, among many, offers readers a dip into a veritable bestiary of African beasties.

While this book isn't going to have the kind of meat to its bones that will satisfy a serious armchair conservationist, it's still the kind of read that combines facts with myth, and serves up a dish that is both entertaining and informative.

Muirhead's writing is light, fun and easy to get into – and as he suggests, it's the kind of reading you can do before you go to bed, or even if you don't have a huge amount of time and are looking for a short piece to while away a minute or three. Also, illustrator Patricia de Villiers's art provided a quirky counterpoint to the text.
Posted by nerinedorman at 1:55 AM No comments:

Wise about Waste: 150+ Ways to Help the Planet by Helen Moffett

Hot on the heels of 101 Water Wise Ways, Helen Moffett wrote its companion, Wise about Waste: 150+ Ways to Help the Planet. Both these slim volumes are, in my opinion, two of the most important books you can add to your reading pile. Who among us hasn't looked at the state of the environment – from the large-scale destruction of our rainforests all the way down to our fragile river systems choking on garbage? And who among us hasn't felt a degree of helplessness – the problems we as a species face in terms of global warming, mass extinctions and pollution seem far too big for any one person to fix. 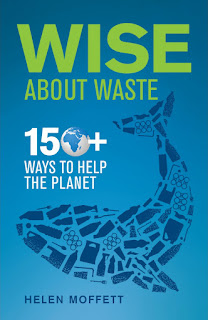 And as Helen states in this book, it's true. One person cannot change the world. But the message she imparts is clear: one person can reach out to another, and build a community to bring about change where they have control. You don't need to give into suicidal despair. Going green in your life is about creating hope, about creating, as Helen puts it, a life raft when the ship is sinking.

Topics covered in Wise about Waste include taking a long, hard look at how we as individuals consume – more often than not, those of us who have a fair bit of disposable income buy more than we use, and waste a lot. Often our food, and other items we purchase, are packaged unnecessarily in so much plastic. Do we really need to buy new clothing, that new car, upgrade the cellphone? What can we do about the electronics or furnishings we no longer need? Are we recycling? Reusing? How can we as families work together?

Ultimately this is not a book about going out to change the world overnight. Not all of us are a Greta. Helen acknowledges that creating those vital, broad-sweeping changes is difficult. But she does offer us hope, and oodles of practical advice to start creating those changes within our own homes and communities. And who knows, perhaps these changes can ripple outwards. If we look at those changes from a grassroots, individual and community-based level upwards, then it's a start. And maybe a start, with aim to long-term personal accountability is what we need to aim for.
Posted by nerinedorman at 2:34 AM No comments:

Green Lion by Henrietta Rose-Innes is one of those books that languished for far too long on my TBR pile, and I'm so glad I've taken the time to rectify this unfortunate state of affairs. This story is told entirely from the point of view of Con, recently returned from working as a security guard in UK museums and trying to find employment. 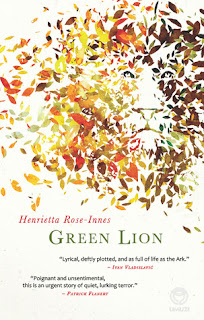 The novel fluidly leaps between past to present as we learn of Con's troubled friendship with Mark, and the dysfunctional relationship Con shares with his late mother. His situation with his girlfriend Elyse is on shaky ground too, and their unequal relationship becomes more of an issue as the story unfolds. Con himself is remote, passive – he tends to immersion in his outsider status, incapable of ever truly connecting with the people around him, despite his desire to do so. His absent father haunts the periphery of his life, while Con himself gives the appearance of envying his friend Mark, who has it all when it comes to family and wealth. I'd hazard to say that Con's fascination with Mark may even have deeper roots – that he isn't willing to admit even to himself. Mark is everything that Con isn't, to the point where he feels that association with that which he desires most may create a form of sympathetic magic to enrich his own life.

Green Lion is richly textured, flavoured with evocative alchemical imagery, and it's also a story that is hard to pin down – providing one hallucinatory, dreamlike scene after the other in a Cape Town that exists as a might-have-been. It is also a tale as unreliable as its narrator, who throughout the chapters is stalked by the idea of the predator rather than a flesh-and-blood lion that we can see and trap. And in the end it's the lion that exists as placeholder, a menacing, inescapable fate that awaits Con that he projects his fears and desires onto Sekhmet, the lion in the zoo where he works.

This is also a story about identity – seen in how Con to a degree is a parasite who attempts to assume aspects of self that don't belong to him in an effort to establish an authentic identity. In the end, he is mired in the very illusions he seeks, settling for the facsimile than the real, that is forever outside of his grasp.

I suspect also that this is the kind of story that is so laden with metaphor that you can pick it apart on every read-through and find further nuances. I need to go back and give this one another shot at some point. In the meantime, I remain in awe of Henrietta's writing.
Posted by nerinedorman at 11:25 AM No comments: