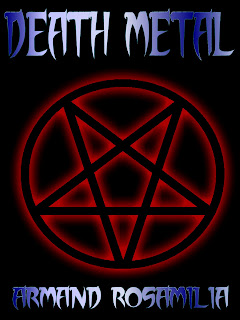 I’ll be straight up and say there are no enough stories out there that cast the metal scene in an authentic light, so Death Metal was a whiff of freshness to the standard portrayals of the alternative scene in popular media. On the surface, our protagonist, Daniel, has it all: a successful career as a published children’s author, with money in the bank, but all is not well.

It’s *how* he got his money that is the matter, because he is the lone, somewhat inspired/possessed (take your pick) mastermind behind the metal “band” DTC – the main source of his lucre.

But all is not well. In order to tap into his dark muse, Daniel has had to take vast quantities of LSD, which naturally placed strain on his relationship with his wife, Karen, who has kept Daniel from seeing his daughter, Missy. And, when a bunch of crazy fans abduct his daughter, and make outrageous demands that he finish the last few albums to bring about the apocalyptic arrival of the demonic Natas, Daniel, helped by his manager, has to return to that dark, creative space within in order to save his daughter’s life.

Overall, this is a short, tightly written story, but it’s perhaps a little too tight. While I had no trouble with the jumps between past and present narrative, I felt the tale could have done with a bit of additional layering to beef up the characters’ motivations, as well as emotions, thoughts and environment.

That being said, I did enjoy Death Metal, especially some of the ribbing at the politics one encounters in the metal scene – it sounded a bit familiar [smiles] to some of the articles I’ve read about certain musicians... And I’d have loved to have seen more. And perhaps a bit more misdirection as to whether this shadowy Natas was indeed a figment of Daniel’s tortured imagination or something more sinister. I must admit I had my suspicions with regard to the ending about midway through the story, so the conclusion was hardly a surprise, I just didn’t expect things to resolve quite the way they did.

Posted by nerinedorman at 2:07 PM