I am a terrible person because I only finished watching Supernatural Season 1 this month, and the darn thing came out in 2005 already. As an editor and author of chiefly fantasy and horror, and whatever other sub-genres you care to basically split these into, I guess it was about high time that I got into Supernatural, if only to catch any references to this when reading submissions. 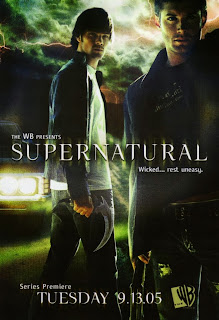 And now I'm chiefly reminded of Anna Dressed in Blood, a recent YA paranormal novel by Kendare Blake which, now that I look at it, has all the hallmarks of an extended Supernatural episode – just sans the bromance elements we've come to know, love and expect with Sam and Dean.

There's no doubt that Supernatural has had a massive impact on urban fantasy an paranormal fiction. And perhaps there's a bit of bio-feedback happening by now, I'm sure.

But getting back to Season 1. I'll start with the uglies. The dialogue and the writing for the episodes feels very hit and miss for me. The first half of the season mostly limps along like a monster-of-the-week kind of scenario. We have everything from vengeful spirits, demon possession and bugs to such urban legend stalwarts like Bloody Mary. Don't forget ancient pagan gods that require blood sacrifice or ... yes. Vampires. This latter thread was left open and I'm curious to see whether our fanged buddies will show up again. (No! Don't tell me! I want to find out for myself!)

Character motivation to behave in certain ways tends toward sketchy. How many times when the brothers split up to do stuff and shit goes wrong... Or just weird dialogue. Or insane leaps of logic.

But yeah. This didn't bother me too much because I was looking for a fun paranormal fix for the same reason that I often love watching classic horror films.

Plainly put, Supernatural is just fun. The Sam/Dean dynamic is just that – dynamic. It's abundantly clear that the actors are having *fun*. The writers play with just about every trope in the horror genre you can imagine, so there's often instant recognition if you're up to speed with your assorted trivia.

If I have to peg a favourite episode from Season 1, it's definitely #19 "Provenance" which features the haunted painting. I think this was the only episode that had me even the tiniest bit anxious. And the writers did a really good job with their misdirection on this one.

Of course I did love the vampires in #20 "Dead Man's Blood". Luther was suitably slinky and schmexy, and I do hope we get to see Kate again. Also, I dig the concept of that magical Colt with its enchanted bullets.

So far everyone tells me things get better from Season 2, which is next up on my TBW list. I'd love to know from you what your favourite episodes from Season 1 were, however.
Posted by nerinedorman at 3:01 PM