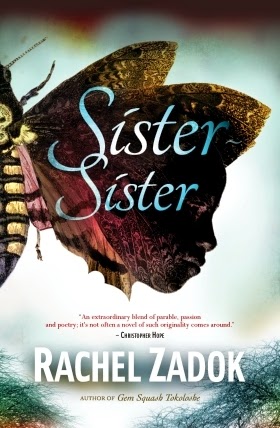 The moment I read the opening lines of Sister-Sister, I was submerged in Rachel Zadok’s almost apocalyptic vision of a possible future South Africa. At the heart of the story we follow the journey of twin sisters Thuli and Sindi, but if you think this is merely an examination of the sometimes uneasy relationship between two sisters, think again. Sister-Sister is so much more than that.

Zadok effortlessly evokes an oppressive setting in the township – a decaying environment where people’s relationships are twisted by circumstances. Underlying themes of poverty, disease and social inequality are evident, yet at first the relationship between Thuli and Sindi shines as a beautiful, pure thing. But the rot sets in even here, and events unfold that unravel this closest of bonds.

This is a story told on multiple levels, fluid in shifting between times and viewpoints. Patient readers who love detailed, lush prose filled with descriptive narrative will be rewarded. There is a dreamlike, non-linear quality here reminiscent of William Burroughs’s Cities of the Red Night in both style and structure.

Sister-Sister is complex, filled with contrasts and ripe with dark visions, populated with enigmatic characters like Ben and Joe Saviour, among others, who exist on the outskirts and take on archetypal, mythic roles. Innocence and the seemingly unbreakable twin bond is threatened by aeons-old superstition, and the girls encounter the somewhat sinister cult of the Believers, whose interference in their lives is a source of dread. The ring road encircling Joburg becomes a symbol of the grinding futility of life, and further tension grows out of an escalating heatwave that bakes the landscape, adding to the sense that there is no hope and no life-giving rains to come.

Tragedy and horror are juxtaposed with beauty in a gradual unveiling that paints a picture where our future has taken a path that is slightly left of field – familiar yet alien at the same time. It encapsulates an African essence that is quite unlike anything I’ve encountered so far. Though filled with equal measures of despair and the darkly poetic, Sister-Sister is a brave work that defies pigeonholing.

Zadok’s work reads like the secret lovechild of Nick Cave and Poppy Z Brite. If there is one South African novel you give a chance this year, make this one your choice.
Posted by nerinedorman at 12:26 PM