A glimpse into a grim future with Edyth Bulbring

For those of you who missed my interview with South African author Edyth Bulbring when it first appeared in the Pretoria News this month, here it is in its full glory. 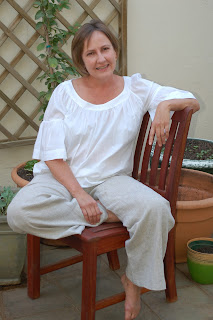 In a genre made popular by such a runaway successes as The Hunger Games by Suzanne Collins and Divergent, by Veronica Roth, which have both spawned film franchises, it is perhaps a difficult to break into and put one’s own stamp on, but South African author Edyth Bulbring has done just that with her novel, The Mark, which tells the story of one young woman, Juliet Seven – or Ettie, as she prefers to be known – who fights against a system that will see her serve her entire life as a drudge in service to the upper classes.

Though, as Bulbring says, there is a lot in The Mark that is similar to other examples dystopian fiction, when she set out to write The Mark, she hadn’t read any in the genre.

“It was a completely new genre for me,” says Bulbring, “and I only started reading books like The Hunger Games and Divergent after I had written the first draft of The Mark. Looking back, I think there is one thing that sets The Mark apart from its fellows. This is that Juliet Seven, or Ettie, who has a prophecy about her saying that she will be the one to overturn the existing repressive system, does not know about the prophecy and she does not embrace popular rebellion. She is a loner, deeply suspicious of other people and she neither joins, nor identifies with the movement in opposition to the existing order.

“But I think it reflects my belief that all systems/governments are pretty much all the same. They are all underpinned by ugly, greedy rich men with big guns. And, that at the end of the day, behind the Mandelas and the Gandhis – the kinds of people whose heroic faces we so love to wear on our T-shirts and shout slogans about – the new systems that come about because of their sacrifices and the movements they inspire, simply turn out to be pretty much like the old ones – underpinned by ugly greedy rich men with big guns. Nothing ever changes. I think Ettie knows this, that one system is as rubbish as the next, which is why she chooses not to become the new poster girl for other people’s agendas.

Ettie isn't the special girl with all the special powers we’ve come to expect in YA fiction. In fact, she isn't even a very nice person, yet she does have some redeeming qualities. Why do we cheer for her despite her not-so-nice side?

Bulbring explains: “There are lots of not so nice things about Ettie. She is duplicitous, cunning and manipulative, a thief, a liar and she is driven by self-preservation. But there are two qualities that allow us to forgive her and root for her. The first is that when she loves, she loves hard and true. The second is that she is loyal to those she loves. I think we like the fact that she is discerning – she doesn’t care who likes her and likes few people in return. She is not into celebrity culture. She spends her love and loyalty frugally and doesn’t spread it around much, but when she does, she becomes incredibly vulnerable. Her love and loyalty make her behave contrary to her nature and have the power to break her. She knows this, and despite it, she allows it to happen.”

The world Bulbring paints has very little hope in it, and Bulbring shares that The Mark started off as a short story she wrote several years ago when her nine-year-old-son was tricked out of some money by a con artist while they were on holiday in Italy.

She says: “I wanted to explore the relationship between a hardened scammer and the boy who falls in love with her. The short story died, but I couldn’t forget the idea about the con artist and the boy, so I thought I would try and turn it into a book. When I thought about a setting, I realised that it would never work in South Africa, or even abroad. I had to set it in a place that didn’t exist. I needed to create a new place and a different time for them. So that’s what I did. I am also a keen recycler and gardener, and one of the things that drives me mental is the control that big corporations have over the environment and the production of food. I wanted to explore the consequences that the actions of a few greedy bastards would have on our future.”

There are few other survivors in this future, but hadedas are a remnant from the past, and add a touch of magical realism to what might otherwise be straight SF. Bulbring concludes: “The Mark is set some 250 years after a time when the world blew up and cut the face of the moon in half. Very little survived apart from fleas and rats and, of course, cockroaches. Except I love birds, especially hadedas, which are prehistoric looking, extremely deceptive in that they are ungainly and ugly, except up close they are quite extraordinarily beautiful. The sound they make (like strangled vuvuzelas) when they circle above my house and wake me every morning, makes me feel glad to be alive. In The Mark, the muti nags takes the eyes out of the hadeda chicks so that they have a second sight. I chose them to the blind tellers of the prophecy because if there is one bird I imagined surviving a conflagration, it would be the hadeda. They look a billion years old and as if they are set to last another billion.” 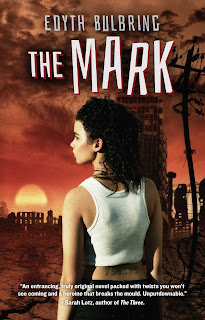 Before you roll your eyes at what you may consider to be yet another YA dystopia read, you can be reassured that The Mark by Edyth Bulbring isn’t cast in the same mould as The Hunger Games by Suzanne Collins as so many recent releases have been. Instead, the work has a grittier, more scratchy-behind-the-eyes feel that one would expect with George Orwell’s 1984.

Ettie, also known as Juliet Seven, isn’t the special girl with the super abilities who is going to save the world and overthrow the evil ruling elite. She’s no one. She’s a drudge, a young woman fated to work in a menial job until she’s only fit for the Reject Dump. Her Mark, which she desperately tries to remove throughout, means she’s trapped in the roles cast for her by others.

We discover a world that is, as Bulbring puts it, “Post-Conflagration”. What exactly went wrong, we don’t find out, but it’s beside the point. Humanity and nearly all the life on the planet (apart from flies) have been driven to the edge of extinction. The Machine is all that keeps mankind going, regulating a rigid caste system in which only a few are lucky enough to number among the Elite. The sun is no longer a life-giving source of light, and any who do not play by the rules in this harsh world are deemed Savage, and cut off from society.

When not training for her future in service of the elite, Ettie is also part of a criminal underground that scams the “Posh”, and she makes no excuses for behaviour nor does she possess many redeeming qualities, beyond her rigorous self-interest. Though she’s clearly not a nice person – and some of her nasty comments are true gems – her devotion to her friend and companion Kitty, whom she will go to the ends of the earth to protect, shines through; and also her love of literature that transports her to magical worlds so vastly different from the reality in which she is immersed.

The main theme throughout the story is that of escape, and not being satisfied with preordained lots. Ettie’s attempts to break free from an oppressive system lead her through many unpredictable twists and turns; as soon as I thought I knew which direction Bulbring was going to take readers, she confounded my expectations.

The Mark is a fast-paced, gritty and uncomfortable read and Bulbring maintains a cracking pace, blending elements of SF dystopia with nuances of magical realism. Pick this one up if you’re looking for something slightly different.

Posted by nerinedorman at 10:28 AM