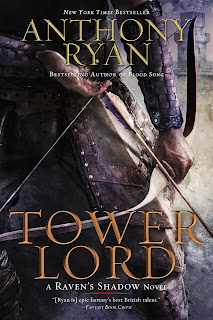 While book one of Anthony Ryan’s Raven’s Shadow trilogy, Blood Song, is a coming-of-age story involving the young man Vaelin Al Sorna, and his rise as one of the greatest military leaders in the realm, Tower Lord diversifies the saga by adding fresh voices to the mix. To avoid spoilers, there’s an old (and favourite) individual from book one who makes a reappearance (no, he’s not dead, as you thought, and that’s all I’ll say), as well as the addition of two women who both show that they are not stereotypical damsels in distress.

Those hoping for the bulk of the story being told from Vaelin’s point of view will necessarily be disappointed, because his role is reduced to being assigned the duty of Tower Lord of the Northern Reaches, who then unites disparate groups in an army that then travels across the land to fight a great battle. I support Ryan’s decision to add new characters, because to a degree, the greater part of Vaelin’s achievements have already reached a peak in book one. To push for more would mean falling into the trap of “Too Much Awesome”, a flaw in many fantasy trilogies (You’ve rescued the princess – now what?). Though Vaelin is nonetheless a key figure in all that transpires in Tower Lord, the other three new viewpoint characters are given the opportunity to show that their roles are equally game changing when the realm is invaded, and its people are hard pressed to fight off enslavement.

Just like its predecessor, Tower Lord is red in tooth and claw, and is military fantasy to the highest order, with just a dab of magic for added spice (if you’re expecting dragons and elves, this is not for you). As always, Vaelin is drawn unerringly by his own magical “blood song”, as he calls it, which aids him in facing down impossible odds to pull off a rescue no ordinary person would even dare attempt. Reva and Princess Lyrna are well rounded out, and their story arcs are at times nail biting, because Ryan doesn’t spare them any grief.

There isn’t much to nitpick with Tower Lord apart from the fact that it clearly suffers book two syndrome in that it’s a continuation of events in book one with foreshadowing for events in book three – which means it feels unfinished, and the pacing might not have the same sense of urgency and energy present in book one. The writing, however, is tight and Ryan succeeds in offering his fans exactly what they’re looking for – a stonking good fantasy epic.

Posted by nerinedorman at 5:38 AM