Queen of Fire by Anthony Ryan

A while back I stumbled across a fresh voice in military-driven fantasy that had me hopping up and down and excitement – Anthony Ryan, who first caught my notice with his coming-of-age story of the warrior Vaelin Al Sorna in the Raven's Shadow trilogy that begins with Blood Song. To my eternal regret, I let way too much time pass between reading books one through to three. There is a large cast of characters to keep tabs on by book the time you hit Queen of Fire, and I could definitely have benefited from having had the earlier story at front of mind. So don't be dumb-ass like Auntie Nerine. If you're going to start with Blood Song, and you've enjoyed it, and you intend to read the rest, get at this trilogy back to back if you can. 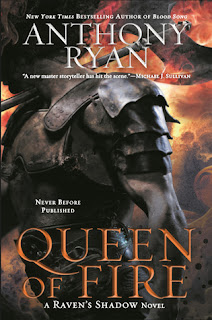 I'll echo what I felt with book two, that Ryan's decision to include new viewpoint characters after Blood Song was a good idea. He keeps the story going and fresh, especially considering that Vaelin's heroic arc is pretty much spent after the events that transpire in book one. By book three he still plays a pivotal role, but he's one of many who each have a crucial task to perform, often under extremely trying circumstances.

Book three is all about wreaking vengeance, and the mighty Volarian empire is about to suffer for the great wrongs they committed against Vaelin, Lyrna and their people. Not just that, but we learn more about the mysterious and frightening Ally and its aeons of evil, twisty machinations. Old friends (I won't spoil) return, and much blood is spilled. In fact, I suspect Ryan is snapping on GRRM's heels when it comes to death, betrayal and strategy gone wrong. Characters are often put through the wringer, and watching how they regain their footing is half the thrill. And trust me, don't ever get too comfortable with a character's situation – Ryan can and will pull that metaphorical rug out from beneath their feet again and again. Awful things happen to people who often have been brought to the end of their tethers. Just expect to be kicked in the feels. Ryan knows how to do this well. Though thank dog he didn't reduce me to ugly crying the way Robin Hobb does regularly. I can only manage one ugly-tears-crying book a year and I've already had my quota for 2017.

Queen of Fire is an action-packed, epic conclusion for Vaelin and the companions I've gotten to know and love. A special mention goes to Reva, whose bravery and daring is unparalleled; I suspect she'd give even Wonder Woman a run for her money. The world building is complex and textured, and you get the idea that there's loads of history just beneath the surface that is never quite fully revealed – and I love it when authors understand how to layer on the mystery of ancient pasts. And yusssss, I'm already looking forward to sinking my teeth into the next Anthony Ryan novel I've got sitting on my shelf.
Posted by nerinedorman at 1:20 PM