A not-so-grim reaping with Sergio Pereira

Nerine Dorman: Welcome, my dearly beloveds. Today we’ve got Sergio Pereira, whom I’ve been stalking following on assorted social media platforms for a few years now. Which means we’re kinda buds and have each other’s backs when there’s a dogpile on Twitter. Anyhoo, so Sergio’s written this book, which I then edited, and here we are. If I have to describe The Not-So-Grim Reaper, I’d say it’s when Bill & Ted had a bastard lovechild with Terry Pratchett. So, let’s hear what Sergio has to say… 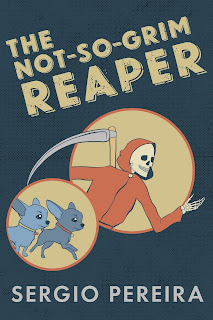 Sergio Pereira: If I'd known this was a party to discuss the pitfalls of Twitter, I would've brought chips and grape juice. In all seriousness, thanks for the intro and the editing of The Not-So-Grim Reaper. You've pretty much nailed the exact angle I was going for with your description of it. In fact, the first time you mentioned Bill & Ted, I punched the air and said, "Yes! Someone got it!" Sometimes, I fear the world has forgotten about Keanu Reeves's greatest role in lieu of The Matrix and John Wick…

ND: I’ve seen a pile of grim reapers show up in slush during my travels, but you’ve breathed life into the trope with your humour. I’ll admit it’s not *quite* my usual genre, but I did find myself chuckling most inappropriately while I was working through your manuscript. What do you reckon makes humour tick in fiction, considering you don’t have the visuals to go with the routines…

SP: Good question. Much like comedy in any other medium, it needs to be relatable. People love to laugh at themselves, so you need to make the punchline about something they understand. We might be playing in an odd world where grim reapers, magic, and hellhounds exist, but you’ll still identify with the key concepts of bureaucracy, working a job you hate, and disliking your neighbour. That’s where the humour is found; in what we regard as the usual. Watch any good comedian and see that the strongest laughs come from the ordinary.

ND: What I quite enjoyed about your story was that even though it was often quite absurd at times, there is an underlying sincerity to your main characters – and perhaps a key theme I feel is that of friendship and loyalty. This I found quite refreshing, to be quite honest. Care to add a little more about this?

SP: When I was a child, my grandmother told me that you'll have many acquaintances in life but few friends. I never understood what she meant until I was much older. It might sound cynical, but there aren't that many people who'll be there for you when the going gets tough. Most of them will be around when things are good, but as soon as the stormy weather hits they'll hightail it. In The Not-So-Grim Reaper, the main characters experience how friendship isn't always easy and they do stumble; however, by remaining true to themselves and others, they realise how rare and precious it is to have something so special in their lives.

ND: Oh, I totally relate to this. But now, to change tack – let’s talk about chihuahuas. What makes them truly evil?

SP: Absolutely nothing! My girlfriend had a chihuahua, and he was the most protective dog I've ever seen. He might've been the size of a shoe, but he'd protect her. Much like a cat sees itself as a lion, I think chihuahuas view themselves as wolves (or hellhounds). I love animals and will try to make them a huge part of my stories in a big way. In fact, the one thing that’ll make me turn off a movie or TV show or throw down a book is if an animal dies. Kill off all humanity if you want to, but don’t you dare hurt the fluffs.

ND: My experiences with chihuahuas have not been as positive. My mother had two ankle-snappers that terrorised me when I was a child. In hindsight I realise they were just trying to protect her from the thumping, clumsy idiot sprog of hers running through the house. But gosh, darnit, they drew blood. Chihuahuas may be small, but when you’re three, they’re bloody terrifying. But let’s chat about your cover art quickly – you’ve employed the talents of the wonderful Cristy Zinn, and I think she’s really outdone herself.

SP: I know, right? I’d seen Cristy’s work on Skolion’s books, as well as her mock-ups on Looma Design’s Facebook page. When I saw the Coraline one - which is one of my favourite books, by the way – I knew that she could create something apt and special. I reached out and she was available. So, I gave her a brief idea of what I had in mind and she came back with this incredible cover. If I had an unlimited budget, I would’ve asked her to do illustrations for the book, too. Alas, I still needed to eat this month. Two-minute noodles aren’t so cheap anymore.

SP: Thanks for hosting me!

ND: And I wish you well with this tale, Sergio. Here’s hoping for many five-star reviews. 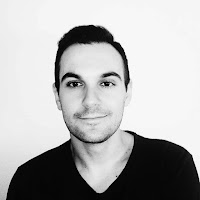 You can purchase your copy of the Not-So-Grim Reaper at Amazon and Google Play.

About Sergio:
SERGIO PEREIRA is a speculative fiction author and journalist from Johannesburg, South Africa. He has a strong interest in comic books, film, music, and comedy. His short stories have appeared in various magazines and anthologies, such as Devolution Z, Sirens Call Publications's Monster Brawl!, Centum Press's 100 Voices, and Tales from the Lake: Vol. 3 from Crystal Lake Publishing. He is his dog’s favourite author.
Posted by nerinedorman at 2:52 AM