A meeting with Carlyle Labuschagne

I've been seeing a lot about Carlyle Labuschagne online, so I decided to invite her over. Oh, and she's a fellow South Africa, so it's great to see more folks from the Rainbow Nation get out and go do awesome things. Welcome, Carlyle!

I've been seeing a lot about your writing on various social networks, so please fill me in a little about your current title, the character and the setting? Are you busy with a series? Do you have other titles planned?

My debut novel - The Broken Destiny is told thought the main character Ava. She is the first of her kind to experience human emotions. Secretly she keeps a journal of her mother's away from the keepers and council that has her questioning everything. And that's when things go horribly wrong for her.

The setting is on a planet called Poseidon, where everything there too conveniently exists because of The Council, of science. The planet however is a very old beautiful planet with purple skies, silver trees and turquoise oceans, this planet was once inhibited by the ancient Atlantians known as Minoans. This is the first in the Broken Series. Yes I have started working a supernatural series.

And rave reviews? What have your readers said about your writing? 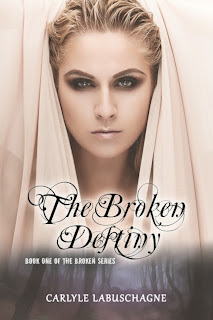 "The Broken Destiny is a richly constructed tale, brimming with detail and narrative that draws upon classic elements of fantasy, which Carlyle has skilfully re-imagined into her own signature brand." - Dean Mayes, author

"Author Labuschagne’s writing etiquette allows it to be enjoyed by anyone. This dystopian story she has created is completely unique and refreshing." - Jean Book Nerd

"A sci-fi urban fantasy fiction that will undoubtedly capture and enthrall you upon every page." - Tania Elizabeth, author

" Carlyle Labuschagne not only writes beautifully, she has proven that she’s an author to be reckoned with; she has shown me that she is more than capable of creating a whole new world; has completely captured my heart with her imagination; weaves a story I want to keep reading; engages me in such a way that I become one not only with the story - but one with it’s characters, and has magically uprooted me from my comfortable existence to the gorgeous planet she’s created – Poseidon. For someone who isn’t (or wasn’t) a keen sci-fi fanatic, I am completely and utterly impressed. She’s managed not only to win me over, but has converted me to such an extent, I am a huge fan." - SSbook Fanatics

"The Broken Destiny (Book One) is an amazing beginning to a new Fantasy series. The reason this novel stands out, is because of the wonderful way the author weaves words and images. The world building is stunning."

Tell us a little about yourself. Where do you live? What's a day in the life of Carlyle?

I live in South Africa, Johannesburg, in the suburb of Florida Hills, with my husband and two gorgeous boys. By day I work as a PR and marketing manager, and late night and weekends I work on my books and articles. I love food, to swim, nature, to read. I have a blessed life.

What are some of the novels that have had the greatest influence on you as a writer? What's on your reading pile at the moment?

Kristin Cashore novels - her world building is something to aspire to. Stephenie Meyer novels - her ability to write so much detail and significance into a story is astounding. Cassandra Clare has a great way with words, action and imagination. To be fair, every book I read teaches me and has an impact on my skills.

Future plans? What lies ahead for you over the next year or so? What can readers look forward to?

Book two will be coming out this year. I hope to publish a short story , and get a huge dent in the other two book series I have started. I often write guest posts, and published articles every second month with IUemagazine.


Autho Bio
Carlyle Labuschagne is a South African debut author working her way into the hearts of international readers with her first novel The Broken Destiny. She is not only an author but works as PR and marketing manager by day. She holds a diploma in creative writing through the writing school at Collage SA. Loves to swim, fights for the trees, food lover who is driven by passion. Carlyle writes for IU e-magazine an inspirational non-profit magazine that aims at inspiring the world through words. The drive behind her author career is healing through words.

My goal as an Author is to touch people’s lives and help others love their differences and one another.

A firm believer in - YA saves!

Blurb:
Ava knows much more, and feels much more than she is allowed to. When she starts questioning her origins and the destruction of Earth, things go horribly wrong for her. She is saved by a Minoan boy from an attempted kidnapping on her life – the perpetrators are evil Zulus and their dark ancient magic. Humans and Minoans are forbidden to interact with each other, and as she is taken back to their village she finds out why – they know of her, her kind and her destiny to save a dying race. Ava must rid them from the Council’s ruling and free the galaxy of The Shadow. Her destiny is to rise above the fall, because within her soul is the key to an archaic weapon that has been missing in the mix of a genetic code since the time of the ancients. As the prophecy unfolds she learns of her bloodline – a bloodline that makes her less human than she could ever have imagined. She alone has the power to destroy or save, but the mind-shift is a horrible thing. Ava will become what she hates to save the ones she loves. Beaten, poisoned, possessed and betrayed by her own emotions, she has no choice but to rise above it all… for that is her Destiny.

The Broken Destiny was voted #3 on the Goodreads Debut list for 2012.

Prologue
All my life, I had searched for something, something I thought I ought to be. I felt like I was living someone else’s life, waiting for the awakening of my own. I felt like an empty shell burning for life. That was, until the day I lay dying in the prince’s chambers. I could no longer feel the pain from the tear in my gut. The only sensation left was a hollowed-out feeling that I had made a huge mistake in assuming that taking my own life, would have stopped the ancestors’ spirit from raging out. I had given up. I didn’t want to see myself killing the ones I loved. I was the Chosen one, but I threw it all away for what I thought would save a life. Could you end a life to save a life? I did, and I have regretted it ever since. I realized then that things like me are not meant to exist. What had been missing my whole life? It was I. To find myself, I had to lose myself in the worst possible way. The consequences of my actions became the legend of The Broken.

Posted by nerinedorman at 11:46 PM