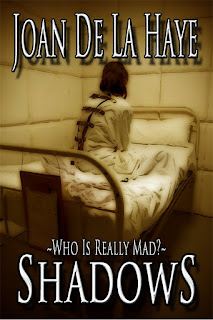 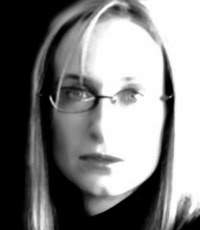 Today I have the pleasure of featuring fellow South African author, Joan De La Haye, here on my blog. She is the author of Shadows and is fast making a name for herself in horror fiction.
Welcome, Joan. When did you know you wanted to write novels? Do you have any amusing anecdotes related to your first writing attempts?
I wrote my first story at the age of twelve. It was a fairytale called The Wonderful World of Candy-floss. My mother sent it off to a local publisher who felt that I should write in Afrikaans, since I obviously couldn't spell in English and my surname (which was Groenewald at the time) wasn't English either. I was devastated! It took me a few years to get over the rejection. My mother just said the man was obviously an idiot and gave me some chocolate. Now, whenever dealing with rejection I need chocolate.
Why horror? What is it about the genre that turns you on?
I find horror to be a fascinating genre. It's all about pushing the boundaries. It's not "safe". Most other genres are very much in a box and have very fixed rules, which horror doesn't have, and I love that. I love that it's filled with free thinkers, both the authors and the die-hard fans. Plus, let's face it, in some perverse way we all love to be scared. It makes us feel alive in a manner that no other genre can.
What are some of the prevalent themes running through your stories?
Insanity and rape. I think we've all had moments where we've questioned our own sanity and that of the people around us. Rape is one of the most horrific experiences a woman can have and survive. It's also something that is way too often swept under the carpet and ignored.
Tell me a little more about your existing publications. What path did you follow on the road to publication?
Shadows is published by a small indie publisher based in the States called Generation Next. I'm a huge fan of indie presses. They do so much for their authors and provide a lot more freedom. My second novel, Requiem in E Sharp, will also be released shortly by Generation Next.
How do you approach the craft and art of writing? That being said, do you have advice for writers who're approaching their first novel?
I try and write everyday, but sometimes my muse decides to take a holiday which can last for anything from a couple of days to a month. When that happens I grab the chocolate and ride it out as best I can. Apparently I get rather bad tempered when the muse is on a break, so the chocolate prevents me from killing anybody.
My advice would be to just write the first line, then the first paragraph, then the first page. Focus on the line in front of you, not the next hundred pages. I would also suggest reading a LOT! Also read Stephen King's On Writing. It's a must-read for all writers. I reread it everytime I get stuck or when the muse has pulled another disappearing act.
Lastly, who are the authors you'd like to thank for setting you on the path of being a horror writer? What is it about their writing that keeps you returning to their books time and again?
The obvious one would be Stephen King. I think most of us can blame our love of horror on him. His body of work is awe inspiring and he is so easy to read.
The less obvious one would be Dennis Wheatley. I grew up with his books and didn't even realise that they were classified as horror novels. I loved the adventures he took me on and the exotic places he took me to.
Links
Buy Shadows at Amazon, Smashwords or Exclusive Books.
Joan's blog: http://joandelahaye.wordpress.com/
Follow Joan on Twitter: http://twitter.com/JoanDeLaHaye
Posted by nerinedorman at 11:29 AM