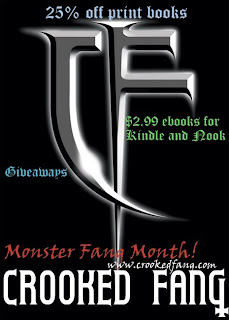 Because I'm so ridiculously proud of Crooked Fang, the novel by Carrie Clevenger for whom I played editor, I'm also happy to give a splash on my blog today to share the fact that she's running a special for the month of October. It's available in print and electronic formats.

If you have no idea who or what Crooked Fang is, it's a story featuring a vampire--one Xan Marcelles--and he's a total breath of fresh air in the genre.

But instead of me doing all the talking, I'm going to pull some quotes from happy readers off Goodreads.

"Xan is a completely lovable character, even when he's doing his best to screw things up. A breath of fresh air in a sea of stagnant vampire books! This book is not to be missed." ~ Synde

"Oh yay, another vampire, I hear you cry. Stop right there. Forget for a moment that Twilight ever existed, and give Crooked Fang a go. Why? Because sometimes you can almost forget that CF's hero, Xan Marcelles, is even a vampire. I prefer to think of him as a grumpy, whisky-drinking, chain-smoking bassist who's going to live for a really, really long time." ~ Icy Sedwick

"He’s a gritty, heady mix of biker/ musician hottie next door and badass vampire trying very hard to just stay off everyone’s radar. There will be no ruffled poet shirts here. Expect lots of whiskey and cigarettes, Harleys and muscle cars, and references to rock music that will span most of the history of rock. He’s also got a low tolerance threshold for bullshit, but that doesn’t stop him from ending up in it." ~ Suz

"There were a few scenes in Crooked Fang that absolutely set me back on my heels, scenes of such crystalline, short-leashed violence, such visceral power, that I felt my blood pressure rising and my breath catch in my throat. That doesn’t happen often with me and, when it does, I can’t help but shake my head in jealous admiration and say, 'damn, that’s some good writing.'" ~ Cathy Olliffe Webster

Well, what are you waiting for? This is, in my books, one of the best vampire stories to hit the shelves this year, and I'm the darndest luckiest editor to have seen this story and snatched it up. I don't think you're going to get this one as cheaply as it is right now. Ever again.

Posted by nerinedorman at 11:22 AM