Still haven't read some of my earlier works? Well, as the graphics tell it, Lyrical Press is having a sale for the rest of this month. And these prices really are something else. So, c'mon, my books are totally right there for a Halloween read. Go check 'em out. 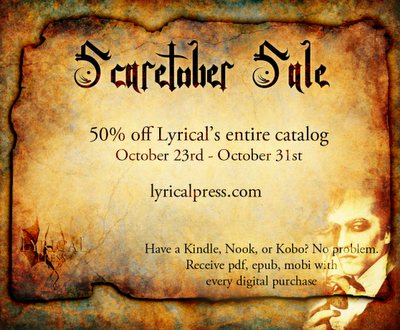 THE NAMAQUALAND BOOK OF THE DEAD
How far will you travel to lay your dead to rest? 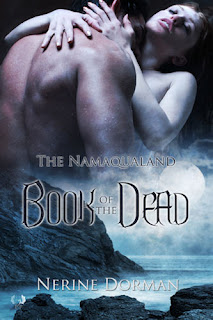 Struggling to come to terms with her boyfriend Aidan’s death, Chloë is ill prepared to deal with the violent murder of his best friend. When tantalizing evidence suggests there is more to Aidan’s apparent death than meets the eye, Chloë will not let her lack of material resources keep her from uncovering the truth, even if the truth proves far more dangerous and with a far more sinister nature than she bargained for. 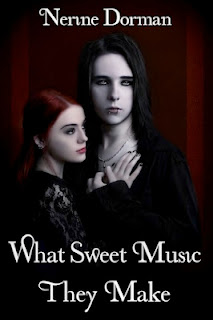 WHAT SWEET MUSIC THEY MAKE
Music brought them together, but can it set them free.

Betrayed by those closest to her, musical prodigy Tersia is heartbroken. She immerses herself in her music, turning her back on love. However, when she notices Severin at one of her performances, the serious, pale young man makes her want to risk her heart again.

Severinís future as a lackey to the vampire Lord Murray has him chafing at his bonds. That is, until he encounters Tersia, whose rare musical talent captivates him. But Severin is not the only one to notice her. Other, darker forces have taken a sinister interest in her potential.

Tersia and Severin can't deny the spark that has ignited between them, but can they overcome the shadows that threaten to smother their trust? 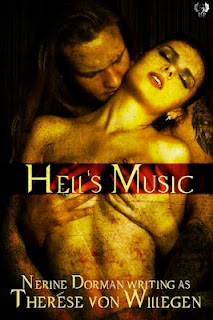 It's never nice when your boyfriend leaves you for someone else. It's even more of a slap in the face when he leaves you for a man. Emily Clark has put her wild years and the boyfriend she considered "safe" behind her, ensconcing herself in a Luddite lah-lah land centered on her second-hand bookstore.

But when her self-absorbed sister runs away from home to end up on her doorstep, Emily discovers the past has a funny way of creeping back into her life. And when an alternative musician uses her shop as a hideaway from a nosy reporter, Emily finds herself falling for the enigmatic man. By the time she realizes his celebrity status, it's too late--she's head over heels for Simon van Helsdingen, a
notorious shock-rocker. Not only must she deal with her sister's delinquent ways and their dysfunctional family, but Emily must navigate the stormy seas of
being with a man whose reputation for trouble puts Ozzy Osbourne in the
shadows.

CONTENT WARNING: Sex, drugs and rock & roll
Posted by nerinedorman at 11:13 AM