Daughter of Shadow by Tyler Sehn is book one in what looks to be a cracking epic fantasy saga. And for those who have a love of military fantasy, this might even push a few of the right buttons – there are fantastic, well-realised locations, bloody battles, strange magic and even stranger beasties. We follow along with Melea, who has a particular power that allows her to harness the elements of things around her to incorporate them into her magical weaponry or armour. This talent of hers has naturally made her incredibly useful to a power-hungry god-emperor – and she acts as his cat's paw on track for his plans of world domination. Mix in a militant, ideologically driven religion to fire up those imperial powers, and you've got a lovely recipe for unfolding drama – especially if characters such as Melea, and to a degree the priest Belenus, act on orders but don't really take time to think about whether what they're doing is right. 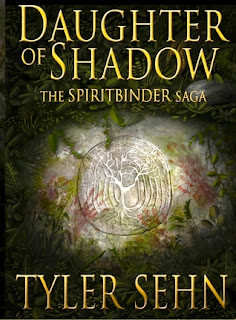 Okay, that's the very basic gist of the novel. But.

This novel needed a developmental editor in a very serious way.

There's no doubt that Sehn is a gifted wordsmith with a talent for storytelling, but he needed an editor to rein him in, and help bring this sprawling epic to heel. Beyond the fact that sometimes viewpoint characters act, with very little understanding of their motivation (especially in terms of Melea's power, which seems to act of its own accord often and confusingly) so that I wasn't always certain whether this was an instinct on her part or a directed action.

Coupled with that is the fact that the novel's pacing and structure needs better focus. Secondary characters are introduced early on, but have no clear connection to the primary plot. Events take place, but don't truly contribute to the narrative going forward. If these sequences had been pruned, and better focus given on an overarching theme – for instance Melea's and Belenus's gradual realisation that their faction may not have the right of it – then we'd be sitting with a far stronger novel in our hands.

As it is, we hurtle towards the end of book one after a number of detours, and are left on a cliffhanger. I'm sure that this won't present a problem for serious fantasy readers who're invested in a multi-book epic, but I'd personally have liked to see things resolved a little tighter by book one, with enough threads to continue further. For an indie-published book this one's not bad, and it's rather ambitious too, but with a little more polish it could've hit closer to the target.

I must give a shout-out to the character Belenus, however. For all his faults, I don't know why I liked him as much as I did. Perhaps because despite his blind adherence to a religion, he was basically a good man who believed he was doing the right thing – and he had the necessary self-reflection to understand once his path was perhaps not the right path after all. Melea herself was too much of a placeholder type character for me – a canvas for the magical powers rather than a living, breathing person with well defined motivations.
Posted by nerinedorman at 4:42 AM