Following on the breakneck speed of Apocalypse Now-Now, Charlie Human's anti-Harry Potter, Baxter, is back. This time he has to attend a school for the magically inclined – a rather nasty place in the middle of nowhere aptly named Hexpoort. In typical Human style, Kill Baxter is a non-stop romp from one misadventure to the next, as we are plunged deeper into the world of the Hidden, and those who have to stop that world from spilling out into our own. 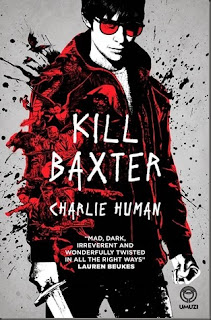 It's not a walk in the park for Baxter, who up until the events unfolding in book one, has lived a rather mundane life. Now he discovers he's apparently a dreamwalker – a rare ability – and he has precious little time to come into his powers before he is dragged into conflict. The kids at his new school aren't helping much either – if ever there existed a motley collection of reprobates, this is it. What doesn't help is that the resident Chosen One (a nod to Harry Potter himself) is an unmitigated tosser with a penchant for pushing Baxter around.

After saving the world the first time, Baxter has decided to turn over a new leaf. So he keeps holding himself back from being the unholy terror he was in book one. And this division of his light/dark self does create problems for him as he goes along – he needs to find his true self before he can come fully into his powers, and the way things go, he may not survive to do so.

Kill Baxter is full of absurd humour, ultra violence and often unexpectedly wry observations about the human condition – something that's difficult to get the balance right. I did feel, however, at times, that the writing is a bit fast, that the overall plot development (as it does in book one) occasionally gets derailed in favour of the style, but somehow Human pulls it off far better in book two than book one. Perhaps it's because he's more comfortable in the world now, knows the characters better.

There's something almost Pratchettesque about the setting, in an Ankh-Morpork kinda way, but far, far darker, and steeped in African mythology. I also suspect that some of the references will no doubt go way over the heads of non-South African readers. But I also reckon that this sprawling contemporary fantasy novel will hit the mark too, because its themes will, by the same measure, seem so fresh to many non-South African  readers. Kill Baxter is fast, funny and sometimes quite silly, but at the end of the day it's one heck of a ride.
Posted by nerinedorman at 3:38 AM