This one didn't quite pass muster for me, and I'm not entirely certain why Patty Jansen's writing didn't grab me. The setting certainly was interesting enough – we enter a frozen world where the previous regime that relied on a type of magic called icefire has been overthrown. In charge now is a cabal of eagle-riding knights who will do everything in their power to remain on top. Folks who have some sort of deformity (they're called Imperfect) are able to wield icefire, and so they face great persecution from the knights. 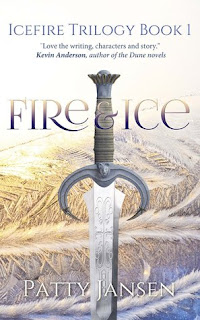 We follow the trials of an exiled noble Tandor, who wishes to reinstate his royal line. Only he's up against the knights, who have been stealing the Imperfect children Tandor has been grooming for his purpose. We also meat Isandor, and Imperfect who's been able to disguise his deformity and enter the knights' service. And it all culminates during a winter festival in a glorious catastrophe of earth-shaking proportions.

I like the author well enough; I follow her on assorted social media, so it pains me that I simply didn't gel with her writing. And I honestly believe the fault lies with the reader (myself). The story left me cold, like I couldn't suspend disbelief to immerse myself in it, and trust me, it's rare when that happens. Whether it was the uneasy blend of fantasy and sci-fi apparent in this work, of the fact that there was a part of me that wanted the story to be more lyrical in terms of prose, I'm not certain. I'm sure there are folks out there who are huge fans, and they find what they are looking for here. But I am not that reader.
Posted by nerinedorman at 12:53 AM