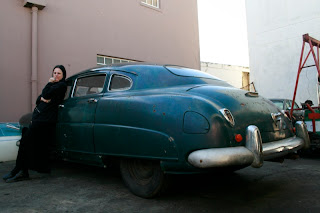 Pictured above, me an' the Big Green Monster.

Finally! We have extricated our serial number and model number from the chap who's currently holding onto our 1949 Hudson Six. The Big Green Monster is with a mechanic a whole lot closer to town than the previous chap, who operated out of Brackenfell and did a great job, but it was not so easy to keep tabs on the work.
A close friend of ours works literally around the corner from the mechanic, so it's convenient for us to get L to pop in from time to time to check on the vehicle. (Thank you, L!)
The Big Green Monster was last driven in 1972, when she was deregistered and spent the next 30-odd years in the backyard of some guy up in Roodepoort. Rats were nesting inside her. It was quite a drama to get her down to Cape Town as finding a company that could handle non-driveable cars was something else. That cost quite a bit but we reckon we were lucky buying our Hudson for just under R20 000. Apparently you're lucky if you find them for under R100 000 in the condition that ours is in.
After being schnaaied to the tune of R10 000 by some douche in Strand, who has since then skipped the country with our money after his business went belly-up, we've had a better experience with the mechanics we've chosen. We're committed now to finish the job.
So far we've rewired her, which has been the most expensive process so far. The brakes and brake lines have been repaired. She's got a new radiator (cannibalised from an old Chev, I think) and we've fixed her water pump (that had to be sent away). The engine has been cleaned and serviced as well. She has a bit of a drinking problem, but we'll worry about fuel once she's able to hit the road.
We bought her new tyres, which we got second hand off an old Jaguar (the girl has style, I tell you).
Our next big push is to fix her gear box, which has rusted through. The previous owner apparently welded the gear box to the rest of the car using chains... So that needs repairs. Parts alone for this next stint will cost R7 000, for which we've put a part payment down on so far. There are other bits and bobs that need fixing along with the gear box.
I've got to take on the next step, which is finding a new windshield. This will be a problem, and we'll most likely have to import from either the States or Canada, it would seem. With the windshield comes the rubbers to hold the glass in place: $$$.
Legally now we need to get the ball rolling with proof that this car exists, 'cos currently, as far as the world is concerned, she's a big lump of metal. Tonight we're going down to the police station so my husband can sign an affidavit stating where he purchased the car and that he swears it's his.
One day, far in the future, we'll have to get an RPC form from City of Cape Town, which will allow us to drive the car for three days. We then have to take her through to the licencing centre in Stikland, where she will undergo a roadworthy and, if we're lucky, be cleared.
This clearance certificate then goes back to City of Cape Town and the car gets registered. Talk about jumping through hoops.
All this is still in the very distant future. We still have to take care of the rust and get the car resprayed, or at least do something to halt the spread of rust and fix the worst patches so we can get her through the roadworthy text looking like a ratrod, which is also not such a bad thing.
We're not even anywhere near talking upholstery and fittings yet.
Posted by nerinedorman at 4:27 AM 2 comments: