A Kind of Magic: Making the Original Highlander by Jonathan Melville

Way, way back, in that delirious summer vacation between my primary and high school years, I watched a film that I'd best describe as pivotal in my development as an author and musician. The original 1986 Highlander, starring Christopher Lambert, Sean Connery, and Clancy Brown, lodged itself in my imagination, and taught me two things: fantasy is my calling, and Queen's music is the best. 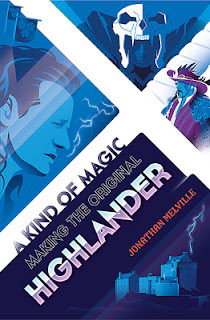 In A Kind of Magic: Making the Original Highlander, Jonathan Melville sets about the ambitious endeavour of chronicling the making of the film that sparked a cinema and TV franchise, accompanied by tie-in fiction and card games that have garnered a small but rabid fan following over the intervening decades.

It can be argued that the original Highlander has its flaws, yet for those of us who've comfort-watched it more than a score of times (yes, I'm one of those people who can say the lines before the actors even open their mouths), it's an immortal classic that provides a visual feast thanks to director Russell Mulcahy's savvy eye and the creative team that had his back. And of course, let's not forget the killer soundtrack developed by British rock band Queen and composer Michael Kamen.

Melville's legwork and interviewing skills result in deep dive into the process of how a film comes together, from the writing to pre-production, filming, and eventual distribution, as well as life beyond the big screen. For all the things that did go wrong (as it inevitably does in the production of any film), so much somehow came right. We get the good, the bad, and the ugly, as well as a fascinating glimpse behind the scenes into the unique pressures in the industry back in the 1980s. Knowing what I do of contemporary filmmaking thanks to my own involvement in the industry, exactly how cast and crew managed back then absolutely blows my mind.

I savoured every chapter of this book, and value it as an important artefact and time capsule of sorts to both entertain and inform those of us who have enjoyed this fantasy cult classic that's part-romance, part-historical adventure epic. This is one for the fans.

Posted by nerinedorman at 10:57 AM No comments: