If you're looking for an absolute treat in terms of ancient Egyptian history, then look no further than Temples, Tombs & Hieroglyphs: A Popular History of Ancient Egypt by Barbara Mertz. I got my version off Audible and it's narrated by the absolutely delightful Lorna Raver, who conveys Mertz's almost puckish humour so brilliantly. 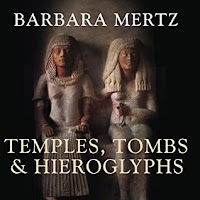 Mertz takes us on a journey from Egypt's ancient past, looking at everything from the people and their customs, to the mythology and the land's rulers. You'd think that so much history packed into one volume might end up dry and tiresome, but Mertz has a way with words to make old bones spring to life.

She's quite clear that much of what she shares is her interpretation of events – and she does bring in discussion of where her points of view differ from others, which I appreciated. But there is a liveliness to her account that I've so far found lacking in other tomes, so if you're not all that academically minded yet have an interest, then this is a good place to start. And I think even if you are an academic, you may well enjoy Mertz's writing for the sheer exuberance that she brings into her words.

There's a little bit of everything here, and although my general knowledge of ancient Egyptian history is pretty solid, I still discovered new stories and insights that further emphasised why I love this particular civilisation so much. Granted, the downside of the audiobook is that there's no access to the graphics that one would encounter in a physical book, but overall, the narration more than makes up for this lack. And if I do ever come across a copy in a bookshop, I know for a fact it will be an insta-buy for me.

I'm so glad that I've had my introduction to Barbara Mertz's writing, and I will most certainly be hunting down more copies of her work.

Posted by nerinedorman at 4:00 AM No comments:

It's no secret I love ancient Egypt, so when a fantasy novel heavily inspired by this fascinating culture drops in my lap, I'm all over it. Soleri by Michael Johnston has a lot of depth and breadth, and he offers us a fascinating chunk of world building. And I enjoy seeing how he subverts ideas I know so very well. 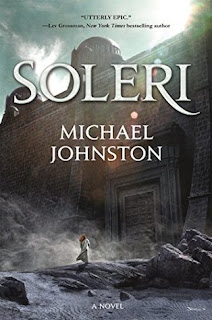 I'm going to do the awful thing that I am loath to do, by comparing this novel, at a glance, to GRRM's ASoIaF, because it follows a similar theme – a family torn asunder by political intrigue and war. And there were certain predictions I made while reading which had touchstones of familiarity in terms of theme.

It's going to be difficult for me to give an overview without spoilers, but I'll do my best. We meet Ren, who is the heir to the Harkan throne. Like all heirs, he's sent to the capital of the empire, to be held as a hostage in the Priory, along with the heirs of the other vassal kingdoms.

We get to know the Harkan king, Arko, who finds himself called to the heart of the empire, where he learns the secret behind the throne of the emperor no one has seen for centuries.

Priestess Sarra, Arko's estranged wife, schemes and plots – she desires power, and she's not afraid of walking all over Arko to get it.

But then we have Kepi and Merit – Arko's daughters. And they couldn't be more different. Merit is the queen regent in Ren's absence, while Kepi is a free spirit, more keen to brawl than take on the responsibility of her bloodline.

This is no loving family – you have been warned.

Overall, the Johnston's writing is fast-paced and filled with action, and I really enjoyed the setting, and the fact that we get glimpses into the history of an ancient city and empire. There were moments where the editing slipped up a bit – a scene where Kepi discards a blade only for it to show up in her hands a few paragraphs later. And at times I did feel that the writing was a smidge on the fast side, where some filling in of characters' motivations would have helped pad things out. But these were not deal-breakers for me.

I have to make mention of the one serious issue that did make me grumble. One of the viewpoint characters has a secret. A pretty big one, too, that they conveniently neglect to think about but then toss in at the end of the story as a big reveal. Firstly, I don't think there was enough foreshadowing, and secondly, I feel that this was a bit of a cheap shot to build suspense – almost as big as a viewpoint character being a murderer and conveniently neglecting to think about what they've done until right at the end. But I'm going on to book two. Even if I'm grumbling a bit about this one thing that was tossed out at the conclusion of book one.

Soleri is part mystery, part military conflict, and court intrigue. The amount of back-stabbing and reversals that occur is quite dizzying at times, and not wholly unexpected given the characters. And the story is set up in such a way that  I'm sure every reader will have a particular character that they'll root for. I'm really curious to find out more about who these mysterious gods – the Soleri – really are.

Posted by nerinedorman at 12:26 PM No comments: