Treasure Island by Robert Louis Stevenson is one of those stories that many of us may have encountered in other forms – I recall a children’s anime series from 1978, directed by Osamu Dezaki. I also recall illustrated children’s books that had the story most likely highly condensed. And that was about it for me. 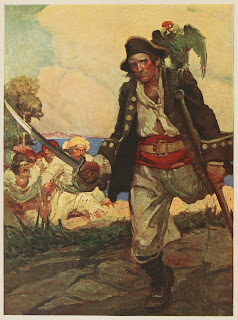 So it was out of curiosity that I picked up the original (you can download it for free from Project Gutenberg) – just to see how I would respond to it as an adult.

While at a glance, Treasure Island is very much a coming-of-age story for our young Jim Hawkins, and is underpinned by a strong sense of lawful good vs. chaotic evil (sorry, I couldn’t help but throw in some RPG terms here), I gain the sense that the story is more about Long John Silver’s quest to steal himself some treasure, and view his story through the eyes of our unreliable young narrator Jim Hawkins, who has stumbled onto the ending of an epic battle.

We are offered a glimpse into the often brutal and mostly violent lives of pirates – men who live on the edge. They risk much and often gain nothing, but the payoff to those savvy enough to stay ahead of the pack is immense – um, there’s treasure involved. Beyond this being an adventure-filled quest, this is also a story about loyalty and, I feel, a kind of subverted father/son relationship between Jim and Long John Silver.

The writing itself is fast paced but laden with so many nautical terms and near incomprehensible dialect between the pirates. So while the story has some sort of authentic feel to it, the narrative may lose readers for the aforementioned. Another thing is that we don’t ever really get a sense of Jim’s feelings – he seems very level headed for one so young as he. Stevenson doesn’t really delve into the emotional side of things, which makes it difficult sometimes to get a full grasp on what motivates Jim.

Overall, this is a quick read, and I’m glad I’ve tucked this one under my belt. At its very bones, there’s a lovely story here that offers fodder for further story seeds. Not for everyone, I suspect, but I do feel strongly that it’s important to dip into the classics from time to time.
Posted by nerinedorman at 5:28 AM No comments:

Knee-Deep in Grit edited by Adrian Collins and Mike Myers

I’m one of those who love my SFF gritty and dark, so when the opportunity arose to review a copy of Knee-Deep in Grit, an anthology of 26 GrimDark SFF short stories edited by Adrian Collins and Mike Myers, I elbowed my way to the front of the queue yelling, “Pick me! Pick me!” 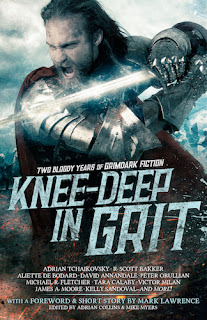 This anthology features tales by the likes of Adrian Tchaikovsky, R Scott Bakker, Aliette de Bodard, David Annandale, Peter Orullian, Michael R Fletcher, Tara Calaby, Victor Milan, James A Moore, Kelly Sandoval and others who featured in the past two years of Grimdark Magazine issues. There are far too many tales that I enjoyed for me to write about them all, but I’ll pick out the ones that really worked for me.

What I love about GrimDark is that it takes characters into awful situations and leaves them with equally awful solutions. Sometimes for the better, more often for the worse (even if they succeed). There are few if any redeemable characters in these stories. The heroes have tarnished armour.

“The King Beneath the Waves” by Peter Fugazzotto was one of those stories that feels as if it should be part of a larger body of work. We follow the point of view of Werting, who’s been taken in by a band of raiders whose ship has been wrecked off an uninhabited coast. He’s at the bottom of the pecking order, but this is not necessarily a bad thing when an ancient cursed treasure is found, and the raiders inevitably fall prey to their greed. I loved this story, for the hints of a history, of dark magic… and perhaps also just because I loved the forbidding environment the author creates.

“At the Walls of Sinnlos” by Michael R Fletcher is a story about loyalty, about how men are twisted to the ends of others – their lives distorted and, I daresay, wasted in war. There’s something to be said for a story where you know there’s going to be no happy outcome, how people justify their actions right at the end. Here we have a mage whose power is the last resort to end a war, and it’s not pretty. This one got me with a gut punch.

“The Right Hand of Decay” by David Annandale made me hurt. In theme it was very similar to the preceding story by Fletcher. Here, we have a castle that is under siege and it looks like a hopeless cause as The Grey Queen piles corpses before the castle. One by one her loyal soldiers sacrifice themselves on this growing mound until… No. I won’t spoil it for you. This is about loyalty and war, and the devastating consequences, I’d say, of pride.

“All the Lovely Brides” by Kelly Sandoval really worked well for me. We follow Lydra as she is prepared for a sacrifice in what appears to be an order of ritual brides known as the Chosen who, every five years, are killed in order to renew the rule of their master. Sandoval explores the complex emotions of a woman who realises she’s not ready nor willing to make that ultimate sacrifice. The outcome was…just perfect.

There was something wonderfully dark and absurd about Siobhan Gallagher’s “A Recipe for Corpse Oil” that worked for me. We follow the fortunes of the pickpocket Tavin, when he finds himself tasked to collect chins for a recipe for corpse oil. I mean, you can live without a chin, right? This was a lighter story for me than the others, and perhaps a perfect relief from the intensity.

“A Fair Man” by Peter Orullian hurt in all the right places. Mikel is a good man working for a corrupt system, and though he is just following orders, to give him some credit, he does try to do good. But a good man in a bad system can only be pushed so far… And the consequences can topple an empire. This one’s a solid read.

“Lessons of Necessity” by TC Powell takes place post-zombiepocalypse, not my favourite genre, but as I always say, it’s not the setting but *what* the author does with it that counts. And Powell makes it count. A short and heart-rending story that hit me right in the feels.

I’m no fan of rats, and “Viva Longevicus” by Brandon Daubs played on my misgivings about the critters. He asks a lovely question: What if a genetically engineered pet becomes the worst invasive pest imaginable? I mean, these little suckers are so cute, you just want to squeeze them until… No, not that. But I loved the contrast of these tough, hard-bitten exterminators going around with flamethrowers and guns, going up against the cute-but-deadly critters. It would have been comical if it hadn’t … well … I don’t know if any of you saw that episode of MacGyver where his buddy got eaten by swarming army ants? Or, wait, am I showing my age here? Anyhoo, hijinks ensue and this is a nasty, brutal little tail. Ahem. Tale.

“Against the Encroaching Darkness” by Aliette de Bodard is underpinned by her suitably lush, lyrical style, but with an underlying grit that makes me shiver in delight. We are told that this takes place in Paris, but it’s not the Paris we think we know. The setting seems to be Victorian but we know there are magical houses that draw their power from the number of Fallen children they have – as in Fallen angels. I love the fact that I felt as if I was only brushing the tip of a world of secrets and mysteries, and wished like hell I could read more set in this world. In order to protect her House Lazarus, Victoire realises that a sacrifice needs to be made. And sometimes being weak is a strength. I’ll leave it at that.

Last but not least, “Bad Seed” by Mark Lawrence takes me back to familiar turf as we have an origin story for a beloved character from his Broken Empire. Even killers have motivations, and here we discover what broke Allan Oak, and why life as a simple farmer, at the mercy of hard men, would not be his fate.

Grimdark Magazine is a publication that I support whenever I have the opportunity, especially in the light of so many markets going belly up in current climes. If this is the sort of SFF you enjoy, you can’t go wrong in supporting. They even have a Patreon page. They’ve won me over with the incredible quality of the publication and the stories they selected. Well done to the authors and editors on this anthology. It’s absolutely perfect, and should have a little something for most readers of SFF.

Posted by nerinedorman at 1:20 AM No comments:

The Dreamer's Tears by Cristy Zinn

My only complaint with The Dreamer’s Tears by Cristy Zinn is that it’s clearly a book one in a series that still needs to be written, and I immediately needed to know more once I’d reached the end. 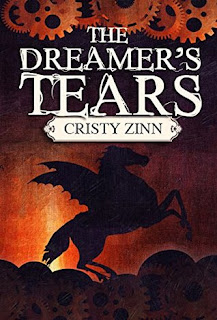 In this story, we meet Ivy Bauble, who lives in the little village of Newton. She’s accident prone and incurably curious. The last thing she expects is that she will become apprenticed to the Master Borinvere, who maintains the magical tower that protects the village from marauding Knightmares.

Zinn’s writing is highly imaginative, heartfelt and whimsical, and this is the kind of story I could well imagine a parent reading to a child for bedtime … or perhaps just enjoying for themselves. Zinn’s language flows musically, and would be a delight on the ears.

She has created a tactile, believable world filled with fascinating characters and a history, that feels as if it has a mythic resonance. I’d have loved for book one to go on a bit longer, to offer a little more resolution, as the ending rushed up quite abruptly, but there’s enough here to have me hooked and wanting more.
Posted by nerinedorman at 7:48 AM No comments: