One of my earliest memories involves going for walks on the beach with my family. We often found such magical items such as mermaid's purses, cuttlefish shells and sometimes, if we were lucky (or early) even paper nautilus shells. We once even found a boomerang! So it was with a fair amount of nostalgia that I picked up Beachcombing in South Africa by Rudy van der Elst.

This light, easy-to-read guide gives a very basic overview of what one can expect to find while on the beach, be it items that are from the sea, such as shells, jellyfish or fish, to items that have floated on the tide such as seeds from trees or manmade flotsam and jetsam. In case you were interested, yes, there is a difference between flotsam and jetsam, and you'll find out what that is.

Due to the scope of the book, there isn't space for Van der Elst to go into any great detail about any of the topics, but he does provide a good jumping off point for those wishing to dig deeper (the references and further reading section right at the end will provide loads of content to seek out).

Each section is amply illustrated with informative photos and info panels, that offers a taste of information that will at least lend seekers with some authority when explaining what they've found – especially useful I reckon to parents embarking on a seaside holiday with kiddos. There is some indication of the legalities and protocol to keep in mind when finding certain objects, and what to do when encountering sea mammals and birds in distress. The useful contacts and numbers right at the end is also a nice touch.

All in all, this is a useful book, and if you're one of the lucky sods who has a beach house, get yourself a copy to leave there for those seaside holidays.

Posted by nerinedorman at 11:58 AM No comments:

The Raft by Fred Strydom

I'm going to be straight-up honest. I don't think The Raft by Fred Strydom quite worked for me. I've heard so much about the book, that it's amazing, and all that, but my feeling upon finishing the novel was that it could probably have had about a quarter of its content dropped on the cutting room floor and been a stronger novel for it.

If you're looking for a post-apocalyptic quest in a similar vein as kind of world you'd expect in The Last of Us, or The Walking Dead, sans the zombies, this is not that book, although there is an inner and outer journey–just not in any strict linear fashion. What we do have is a nested narrative filled with seemingly unconnected vignettes and a fair amount of existential dread.

So if something a bit more reflective and ambiguous in tale-telling is your thing, go for this book. This story will most likely speak to you then. I personally found it a little too loose, and taking just a little bit too long to reach a point. Reality is fluid, and it's difficult telling dream sequence apart from the actual happenings, to the point near the end that I was almost too afraid to trust anything the author laid down in the story. And who knows, maybe that was his intention. There's even a space where Strydom shifts to second person, instead of first, which just jarred me out of the story.

There were times where things got a little Event Horizon for me, so I suppose this is sufficiently SF, but even so, I do feel that the navel gazing Mr Kayle engages in kinda rubs the edges off the impact of the ending. The twist in the ending, when it came, wasn't wholly unexpected, and it had a pleasant sting. I just feel that we could have fewer twists and turns before we got there. Strydom can write, though, and he makes some great observations. I feel if The Raft is viewed in a more literary light, it stands a little straighter. But right now, lit-fic just isn't my jam.
Posted by nerinedorman at 12:28 PM No comments:

I'll start by saying this much, Immortals' Requiem by Vincent Bobbe is not for the squeamish. Blending slashes of horror with dark fantasy, the story follows the points of view of multiple characters as they begin their descent into the catastrophic events that play out when an ancient evil awakens in Manchester. The apocalypse has arrived, and it's very hungry. 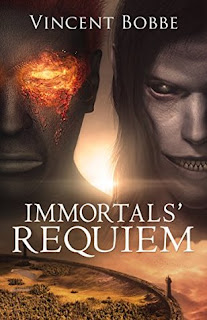 Cu Roi, otherwise known as The Miracle Child, is out of control, and after thousands of years asleep, intends to make his mark on a world ill equipped to deal with the being and his monstrous children, the barghests. In the time that he has been out of circulation, magic has faded even more, and those who would oppose him face a seemingly insurmountable challenge to fight a monster and its spawn.

If you, like me, don't have huge piles of time, this story is perfect – each section is short, and filled with non-stop action, so it's the kind of novel you can read bits of when you're on the go. At times I did feel that I had a little whiplash from all the shifting points of view, but overall Bobbe does a decent job of giving each character some screen time.

Briefly we dip into the world of the elves and their ilk, where a great cataclysm has all but destroyed the way of life of the two towers where the fair folk live. My favourite character out of the entire story was Cam, who's lived among humans for most of his life, having spurned his elven heritage, and who has fallen into a nihilistic pit of despair thanks to the fact that his people's magic is dying. The smart-mouthed elf is merely marking time, from bottle to bottle, and the fact that he doesn't want to be a hero, makes the fact that he's dragged, kicking and screaming into misadventure, all the more entertaining to watch.

Immortals' Requiem is a blood-drenched, ultra-violent quest that features a veritable bestiary of supernatural creatures. There's not much time for navel-gazing, and I'll hazard to say, don't pick too many favourites, as the body count is high. Be warned: this novel has its Army of Darkness moments. That should give you more than enough idea of what to expect.
Posted by nerinedorman at 10:50 AM No comments:

I can pretty much guarantee that every time I've encountered a snake in my garden or while on a hike out in the veld, I haven't had a chance to quickly run into the house to grab a field guide. So to have an app handy on my phone is absolutely brilliant. eSnakes of Southern Africa is based on A Complete Guide to the Snakes of Southern Africa by Johan Marais, and is an absolute must for anyone who's passionate about identifying the scaly critters. And who knows, perhaps recognising a snake might even be a life-or-death situation.

The app is easy to use, its primary drop-down menu giving your a list option with all species, adders or vipers, back-fanged and so on, as well as a useful smart search function where you can fill in fields to identify a snake you're not sure of. There's also a handy spot where you can list which snakes you've seen according to species, location and date, and then also handy extras that give you basics about snake biology, behaviour and more. Each section also has ample photos and illustrations. You have a choice between English and Afrikaans as well.

Now on to the individual species. What makes this app far more useful in practice than a book, is that you're not going to waste time paging. If like me, you already have a basic understanding of the different snakes and species of the region, you'll already know the difference, at a glance, between an adder and a house snake – you'll be able to fine tune your search quite quickly.

Each species profile gives you a good selection of photos to aid identification, diagrams illustrating length, head shape, as well as basic information about length, scale count, colour, preferred habitat, habits, distribution maps and more. Even better, there is a tab for emergency contacts – dog forbid you'll ever need that.

If you're often out and about in the region, this app is invaluable, especially for natural lovers, and is well worth the investment, especially if you don't want to lug books around with you when you're travelling.
Posted by nerinedorman at 11:06 AM No comments: