I picked up Mountain of Daggers by Seth Skorkowsky because people were talking it up on the GrimDark Facebook group. It's a loose collection of tales following the doings of thief and miscreant Ahren, aka the Black Raven, as he goes about his business. Sometimes he's on top of things. Other times his opponents get the better of him. Seth's writing flows along at a decent clip, and he paints a well-realised world that promises to be filled with lore (kudos there). I wanted to nitpick a little but shoved my editor hat under the table, even though I'd have enjoyed having a go at him. 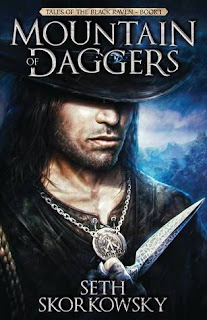 But where this book falls flat is the very concept that it presents – a series of vaguely interconnected stories about the legendary Black Raven. While there are key events that suggest motivation, the lack of overarching narrative to drive the story forward means that it loses some of its oomph. Look, it's not a bad concept, but it could have had a bit more meat to the bones, if that makes sense.

Don't get me wrong; I enjoyed the setting very much. There's most certainly action by the bucket load, but I wanted more depth to the character. As it goes, it feels more as if I'm an observer watching rather than actively participating.

This is still a worthy read though, and if characters with dubious moral inclinations are your thing, with a side order of swashbuckling and getting up to mischief, then you'll enjoy Mountain of Daggers immensely.
Posted by nerinedorman at 1:10 PM No comments:

The Subjugate by Amanda Bridgeman

Every once in a while I like to venture outside of my preferred genres, and The Subjugate by Amanda Bridgeman caught my eye. The author paints a vivid picture exploring how technology may very well impact our lives in the not-so-distant future. The world that she envisions means that every movement a person makes is recorded in some way. AIs and self-driving cars are the norm, but police are still required to provide the human element in fighting crime. 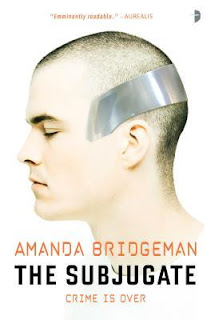 Yet some people – especially religious communities – have moved away from the city to enjoy more simpler lives, without all the surveillance. But when a murder is committed in Bountiful, a strict Christian community, the case presents detectives Salvi and Mitch with more than their fair share of obstacles.

Suspects abound within Bountiful, but things are further complicated by the nearby Solme complex, where dangerous offenders are treated using cutting-edge technology that renders them, as the word suggests: Serene. We follow Salvi's point of view as she unravels the clues that make her doubt even the people closest to her. Hard ethical questions are asked, with no easy answers provided.

The story has a slow build, with short scenes that speed up towards a tense conclusion, and I must commend Bridgeman for her stunning misdirection in terms of me figuring out who the killer was. I'm not a huge fan of crime fiction, but I really enjoyed the ride nonetheless. Salvi herself is a difficult character to get into at first, but as Bridgeman gradually reveals Salvi's past, her fanatical dedication to her police work makes all the more sense. There were times when I felt that Salvi herself was emotionally distant, but that could also just be part of her characterisation in that she keeps herself apart from the people and circumstances around her until she can no longer avoid dealing with the issues that challenge her.
Posted by nerinedorman at 8:05 AM No comments:

Vampire of the Mists (Ravenloft #1) by Christie Golden

I really, desperately wanted to love Vampire of the Mists by Christie Golden but unfortunately this one fell far short of the mark for me. It has all the hallmarks of the kind of tale that I'd adore, I mean, c'mon ... a vampire elf. (Yes, I'm sort of crunchy that way. If an idea is well executed, I'll gobble it up.) 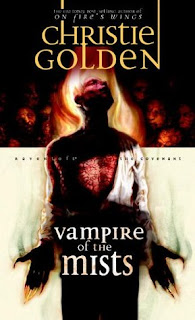 Except this novel could have benefited greatly at the hands of a developmental editor. It's one thing having a story chock full of tropes. It's quite another if you don't find a way to subvert them in some way to give them nuance and overturn readers' expectations. And it's not just the head hopping that drove me dilly, it's also the shallow writing in terms of character development – there was next to no layering, and the prose is adequate at best.

Granted, if you're a huge fan of the setting, and you're into the RPG, you most likely won't be as critical as I am, but truth be told, this read more like hastily dashed off fanfiction than a well-rounded narrative. If the writing had delivered, I would have been won over to enjoy all the Gothic high drama this story packs, but this was not the case. Or maybe I just went into this expecting too much. I don't know. At any rate, I came away disappointed.
Posted by nerinedorman at 3:59 AM No comments:

Granite by Jenny Robson is a quick read aimed at younger readers (I'd say about 10-14 or thereabouts) that dips into the world of the young nobleman Mokomba, as he narrates the story of the downfall of the great African city Zimba Remabwe. His version of events is supplemented by the notes shared by his friend Shafiq, whose general knowledge and literacy offers context. 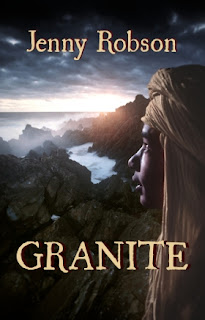 The king of Zimba Remabwe tasks Mokomba's father with finding out the secrets of building cathedrals in the style of the "Milk People" to the north, so a party sets out upon a dangerous journey, by land and by boat, until they reach England. What they find there and what they bring back is not quite what they expect, and we are offered the story bit by bit by unreliable narrators until we eventually have the bigger picture.

Jenny's writing style is engaging and fluid, and her love of the setting shines through with this telling that brings us an Africa-centred adventure, and a young man's coming of age. My only complaint is that the story is too short – there was so much potential to expand this into something more layered. This is a fascinating glimpse into a world of tradition and history, and I was left wondering what else could have been added to give the story further depth. As it is, this is a poignant read that may spark interest for those who'd like to know more about African history.
Posted by nerinedorman at 11:16 AM No comments: