The Ape's Wife and Other Stories by Caitlín R Kiernan

The Ape's Wife and Other Stories by Caitlín R Kiernan has been sitting on my Kindle app for far too long, and I'm glad that I've finally gotten around to reading it – especially since some folks have drawn parallels between her writing and mine (why thank you). First off, as with all short story anthologies, whether single or multiple authors, this is a mixed bag. I gelled with some and not with others, and to go into a deep dive about each story is going to go beyond the scope of this review. 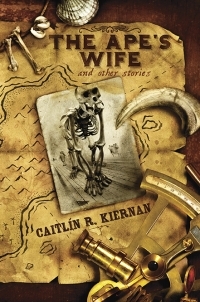 A diverse range of stories is showcased here, from steampunk-infused and somewhat Lovecraftian to plain old weird and re-envisionings of Beowulf told from a queer feminist perspective. I'm not going to go exhaustively into each, as I feel that will ruin the magic and mystery. What I will say is that if you're expecting neat, tidy endings with satisfying twists and likeable characters, maybe step away from this collection and go read Somerset Maugham or Saki.

Kiernan's prose is textured and tactile, and her tales often left me feeling out of sorts and scratchy behind the eyes – all hallmarks of good storytelling. This is not a book I'd recommend for anyone who's looking for comfort reading. I'd hazard to say that each story encapsulates a mood and a setting, and emphasis is mostly placed on emotion and engaging the senses to detriment of a tidy plot. And if that is what floats your boat, then hey, this will work for you. Kiernan doesn't shy away from characters who often maintain objectionable outlooks and opinions, so if you're easily triggered by casual racism and sexism, perhaps step away from this book, too. I feel I must add that some readers appear to be incapable of separating the author from their characters. [le sigh]

As a publishing professional, I feel I must point out that my edition was riddled with small typos of the kind that a savvy proofreader should have caught. I tend to overlook the odd dropped word here and there, but this volume could have done with a more thorough read through before it was published.

This anthology is disquieting and darkly atmospheric, and while not to everyone's tastes, is nevertheless a lovely dip into the writing of one of our important contemporary SFF authors.

Posted by nerinedorman at 11:22 AM No comments:

Opinion: On Sarah and Jareth

This started out as a FB post but quickly mushroomed, and the thoughts here are, IMO, important for storytellers, so I'm saving them here. 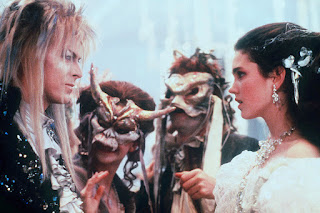 Today's bugaboo which has resulted in a mini blog post. I'm *so* tired of dudes explaining how Labyrinth, with a then-39yo David Bowie and -14yo Jennifer Connelly is basically child p**n in the same vein as Vladimir Nabokov's Lolita. Just stop already. I've heard this refrain so many times over the years.

Labyrinth is NOT Lolita.

And Connelly's memories of him are good. After his passing, she had this to say: "I think it's very sad, his passing, for so many reasons. To me, not only was he a genius, he was a genius who had the time to be kind. [That] was my experience of him.”

Here's my hot take: Jareth the Goblin King acts as an animus to Sarah's sexual awakening. And while there was implied sexual tension between the two characters, it was never followed through.

I always view what happens once Sarah steps over the threshold from our reality into Jareth's labyrinth to be some sort of dream-sequence. She enters a liminal space in which she comes to terms with the fact that she's no longer a child and must soon put away the things of her youth. This is a story about the dawn of sexual awakening.

Yes, Jareth's age makes one uncomfortable, but I believe it's *meant* to. In the beginning of the story, she externalises her power.

This line from Jareth is telling: Everything that you wanted I have done. You asked that the child be taken. I took him. You cowered before me, I was frightening. I have reordered time. I have turned the world upside down, and I have done it all for *you*! I am exhausted from living up to your expectations of me. Isn't that generous?

And until she learns her own true will, she is powerless, lost in a labyrinth of her own making, IMO, until she stands up to that mystery presented by Jareth.

She wins back everything by saying this: Through dangers untold and hardships unnumbered, I have fought my way here to the castle beyond the Goblin City to take back the child that you have stolen. For my will is as strong as yours, and my kingdom is as great... You have no power over me.

In terms of magical workings, this is pretty awesome stuff, and a film that had a massive impact on me when I watched it as a preteen. It's an initiatory fairy tale that still speaks deeply to me years later, it still has all its resonance, despite the dating of the SFX and soundtrack.

Posted by nerinedorman at 2:14 AM No comments:

Silence of the Soleri (The Amber Throne #2) by Michael Johnston

Book one of The Amber Throne, Soleri, by Michael Johnston, got off to a promising start with an Egyptian-themed epic fantasy world, but unfortunately book two, Silence of the Soleri, didn't quite follow up. I feel that this can be attributed to there not being sufficient development for individual character arcs, in addition to a polarisation of the main arc.

Johnston's writing is strong, but I feel that more stringent attention in the developmental edits could have helped lift this story out of the somewhat muddled novel that was eventually released. One good thing is that we didn't have any characters withholding key information as what happened in Soleri. Yet I do have a bone to pick with the mysteries of the Soleri themselves, that were left hanging by the end, which came off with a deus ex machina. Action sequences often felt rushed, with characters' motivations for their behaviour not clearly expressed, which marred the compelling world building for me somewhat.

I know it's awful making comparisons with other, more popular works, but I kept feeling as if these books were offering a serious nod to GRRM's ASoIaF, which wouldn't have been wholly unpleasant if individual character arcs were fully fleshed out.

There's not much else I can say, for fear of spoilers. Johnston has much to offer, and with an editor lending a stronger hand in the developmental stages, this novel could have been so much more. Also, I don't want to come down too hard, if there are more books to follow in the series, and this one is intended as middle book in a trilogy – in which case the loose threads will be picked up later.

Posted by nerinedorman at 8:01 AM No comments:

It's time for me to make yet another awful admission. I've made it past 40+ years on this planet without reading much of Edgar Allan Poe's writing. If I recall correctly, I read "The Black Cat" when I was a wee little thing, but I don't think it stuck with me. Tales of Terror by Edgar Allan Poe, narrated by David Thorn and Bruce Blau was included in my Audible subscription, so I figured why the heck not. 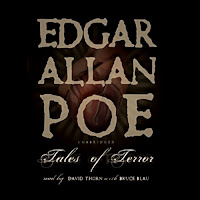 Included in this batch were the following stories: "The Tell Tale Heart", "Facts in the Case of M. Valdemar", "Hop Frog", "Murders in the Rue Morgue", "Masque of the Red Death", "The Pit and the Pendulum", "Fall of the House of Usher", "The Black Cat", and "The Cask of Amontillado".

So, in other words, all the great classics. My big takeaway from this is that Mr Poe has a bunch of favourite words, some of which include "ghastly", "grotesque" and "hideous", among many others, and he had an especial love for describing the beating of hearts of the horror of staring into eyes.

I will admit that as a cat lover, I found "The Black Cat" hard going – more so this time around than when I first read it. "Masque of the Red Death" was oddly apt for the times in which we live. Overall, I appreciated delving into these tales, as the prose is slow-moving, highly descriptive, and layered. Dark, of course, too, which is a bonus. And very much what I would term Gothic fiction.

The production quality was a bit patchy in places – I could clearly hear where extra bits were dropped in, as there was variance in the sound which jumped out at me enough for me to feel the need to comment. Some of the accents the narrators put on also grated on me a wee bit. Not enough to toss the iPhone across the kitchen, but enough to raise a brow.

If you're looking to add to your literary experiences, this is a good introduction to Poe's writing. And I can say that it very much comes alive as spoken word – to get past the author's general wordiness, that is. And he does take a while to get to a point – but then the writing is very much a product of its time, which is something to be kept in mind.

Posted by nerinedorman at 11:48 AM No comments: