Regular followers of my reviews will already know that I'm a huge Dragon Age fan, and specifically for the lore, which I love unpicking with my fellow fans. The Calling by David Gaider follows on from The Stolen Throne, though I suspect anyone who picks up these books will at least be conversant with the games so many of the characters will be familiar to them. 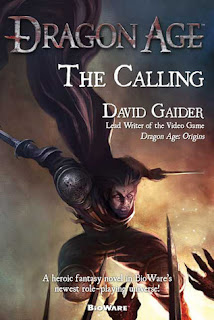 I'm no huge fan of Gaider's fiction. His writing is what I'll term is adequate, and he most certainly is in need of a developmental editor to help with characterisation and polishing up his writing. The Calling certainly flows a bit better than The Stolen Throne, and it was a more interesting read in terms of lore, but that's where it stops for me. I read this for the lore. And because I am interested in Fiona, as well as Alastair's back story.

Maric is still an idiot. Well meaning, bumbling, but an idiot. It's great seeing a little from Duncan's perspective, though here he's painted out as an irresponsible youth who's prone to childish fits of pique. And at one point of the story, I completely felt that he landed into the TSTL category. While I enjoyed this story a lot more than I did the first instalment, there were still aspects of it that made me say, "But why, mummy, why did they do this?" So, yeah, I'd liked to have seen better expression of character motivations so that I could at least understand why they responded the way they did under certain circumstances.

I will, however, recommend this one to die-hard Dragon Age fans who want that little bit of dishing out of extra lore – which is helpful, especially to those of us who write fics set in the world. But I do feel Gaider should stick to writing games and leave the fiction to those who have the feel for it.
Posted by nerinedorman at 10:30 AM No comments:

The Invasion of the Tearling by Erika Johansen

Following on from The Queen of the Tearling, The Invasion of the Tearling by Erika Johansen continues with the endeavours of Queen Kelsea as she deals with the consequences of the actions she took during book one. The kingdom of Mort is invading, and things are not looking good for the kingdom of Tearling. To make matters worse Kelsea is at a loss as to what she can do to stem this tide that threatens to swallow her land whole. The Mort are remorseless, spurred on by their queen who covets the magical sapphires that Kelsea possesses. In addition, Kelsea is plagued by visions from Earth's past, where she relives the experiences of a woman named Lily, whose dystopian world is just as nightmarish as Kelsea's current predicament. 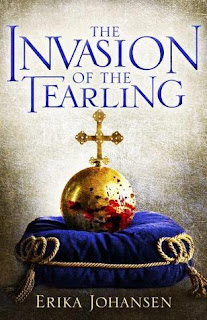 The Invasion of the Tearling, in my mind, suffers a little from what I term as 'middle book syndrome' – there are a bunch of threads that begin here that clearly receive further development later. In terms of character development, there isn't so much focus on Kelsea's journey as there is on Lily's development – which is fine, but I did feel that the pace lagged a bit during the first half of the novel. But things do pick up, so persevere.

It was always apparent from the first book that this was some sort of portal fantasy, however the mechanics of this discovery of a new world was unclear – so without giving spoilers, you'll discover a bit more of the history here. I'm not quite sure how I feel about this now that I'm done, because it does feel as if the world has been robbed of some of is mystery. But perhaps that is merely personal taste on my part. Also, the sapphires as a McGuffin is almost too powerful, in my opinion. Or perhaps the cost of using the stones hasn't been made explicit yet.

Themes prevalent in these books remain that of power – of women in power and women suffering at the hands of those who wield power over their bodies. Kelsea must come to terms with the power gifted to her by the sapphires, and with the knowledge she gains comes a price that must be paid. Many questions are still unanswered by the end of book two, but we are given closure where it matters. This is a solid read for fantasy fans looking for a novel filled with intrigue, mystery and a side order of cruel villains.
Posted by nerinedorman at 11:29 AM No comments:

Swordspoint by Ellen Kushner was a book recommendation from a friend whose opinion I trust, and the story was every bit as lush as I had hoped. Granted, if you're looking for something straightforward in terms of narrative, this may not be your novel. That being said, if you're in the market for a work where an author handles omniscient third person point of view masterfully with vivid descriptions of people and places, then Swordspoint is a winner. 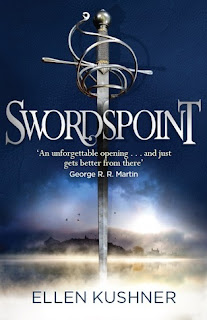 We enter a world where swordsmen are employed by those wishing to settle scores or eliminate opponents via what amounts to legalised assassination – with rules, mind you. The swordsmen themselves are elevated to the status of celebrities – and it is one such swordsman, Richard St Vier, whose story is the primary one that we follow. Richard is dragged into the murky machinations of the local nobility, and though he is never one to be told what to do, he nevertheless tries to push back – and the results have consequences that are difficult to predict.

Much like life, there is no clean closure in Swordspoint. Where the story shines, is in its dialogue, and the mindful expression of interpersonal power play between characters. This is not so much a novel about a quest, but rather a slice of life that gives readers a glimpse into the Machiavellian plotting in a complex society. This is also a novel that begs a second read-through to pick up the bits missed the first time through. Don't go into this expecting magic, dragons and elves – this may as well be fantasy fiction of a historical bent, reminding me an awful lot of the work of Alexandre Dumas with a side order of queer and sharp tongues.
Posted by nerinedorman at 7:18 AM No comments: