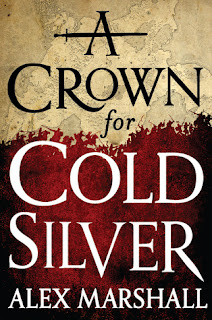 Posted by nerinedorman at 9:51 AM No comments:

Learning How to Drown by Cat Hellisen

Many of the stories included in Learning how to Drown by Cat Hellisen are ones I’ve read before. I’ve even seen early drafts of a few of them or encountered them in publications. But revisiting them is always a pleasure, because Cat is one of those authors whose writing requires a second or even a third read, as there are always images that will be foregrounded in a different light. And with all the stories gathered, it’s striking also to see how the themes of water and transformation are so inherent in many of her tales in this collection. 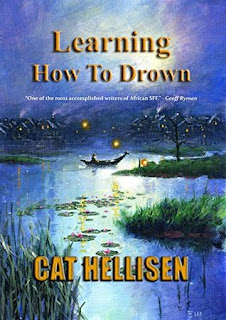 What Cat excels at, is taking the ordinary and subverting it, imbuing even everyday objects or situations with a veneer of magic and mystery, with a side order of scratchiness behind the eyes. Her focus often lies on the uneasy, complicated relationships between siblings, or parents and children, that never have truly comfortable conclusions. She’ll hint at undefinable, almost Lovecraftian weirdness that bleeds into people’s lives, irrevocably changing them – placing them at a crux point in their existence where they take the inevitable plunge into strangeness, from which there is often no return.

It’s difficult for me to pick favourites, but I’m going to go out on a limb anyway. The first story, “The Girls Who go Below”, is about two sisters who visit their aunt in the countryside on holiday, and practice ‘drowning’ each other in the lake. What follows is a strange coming-of-age tale, and unexpected, unconventional music making. I particularly enjoyed Cat’s descriptions of the lake and the surrounding nature.

To those who follow Cat’s ‘Hobverse’ books (you can start with When the Sea is Rising Red), “Mother, Crone, Maiden” offers important foreshadowing, though I advise you to read this prequel after When the Sea is Rising Red if you really want to have those poignant ‘aha’ moments with all the foreshadowing. This story is about choices, and how greater evils can grow out of the ones that promise a quick route to one’s heart’s desire.

Another ‘Hobverse’ story collected here that I found particularly memorable is “A Sun Bright Prison”, which plays with social prejudices, but also the consequences of giving up on that which is vital to your very essence. On the surface, this is a story about love, and it has selkies. What’s not to love about selkies?

Cat’s mythical city of Jarry exists in some other reality that is almost impossible to reach. Mortals who stray to that realm, often find themselves unable to return to our mundanity, and are forced to walk the Long Road – a kind of purgatory which is as ominous as it sounds. Only through dreaming, are people able to touch our mundane world, an act in and of itself that has inherent dangers. One story, “Dreaming Monsters” is about exactly that, bringing the protagonist into the path of the monsters that lurk there. It’s also a tale about love, sacrifice. But perhaps my favourite of the ‘Jarry’ stories is “The Face of Jarry”, and I must thank Cat for her nod to the Jane Alexander sculpture “The Butcher Boys” who ghost at the edges in an eerily familiar and unsettling way. In this tale, it’s all about a seeker’s desire for the fabled Jarry, discovered at the tattered edges of our reality … and when it is found, it is not quite what the seeker was looking for, or expected. And I loved her nasty twist at the end. That’s all I’ll say without spoiling it too much.

I could probably go on and on. For me the greatest pleasure in Cat’s writing is the sheer poetry of her words, and the liquidity of her imagery. If you’re looking for writing that will transport you out of the ordinary, then you can’t go wrong with this anthology.