What I love about Storm Constantine's writing is not so much the story, but rather the mood and the environment that she evokes with each piece. And if you're looking for plot-driven narrative structures with wicked twists, then perhaps this collection of short fiction is not for you. Mythumbra: A Collection of Stories sees Storm collecting stories that have appeared in a number of different publications, and offers a mixed bag in terms of what you might encounter, ranging from secondary world fantasy and sci-fi, to gothic fantasy with Lovecraftian notes. Storm very much pays homage to the rich weirdness of Tanith Lee's writing. 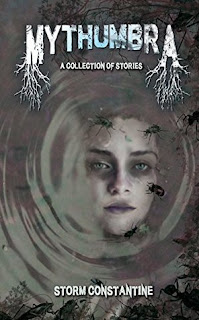 "The Drake Lords of Kyla" is perhaps one of my favourites, with a traveller encountering a dragon-like people known as Lighurds. There's the narrator's fascination with the exotic, and the thrill as she sees a slice of a culture entirely different from her own. This story is more reflective mood piece and travelogue.

"Long Indeed do We Live" was not a story that I really gelled with. It examines how mankind might not flourish as intended in a controlled environment, even though every need is catered for when the environment beyond the protected domes has been destroyed. And yet there is an element of horror, of the supernatural hinted at. Whether this is the imagination of the people in the tale, is a matter of conjecture.

"A Winter Bereavement" brings us into the world of the countess Areta, and her younger companion Mimosa, as the former embarks on a seduction. This is a very mannered, almost Victorian tale, that focuses on mood and gesture, and yet heads off into unexpected, uncharted territory at the end.

Okay, so I loved "The Saint's Well" which pitted a man of the church against the miracles perceived by a small town in the country. It delves into the magic of subjectivity, and now an event may not need to be objectively true for it to still maintain some profound, private truth for those who experienced it. Storm's evocations of the countryside are vivid, and make me feel as if I am right there, walking with the protagonist.

"At the Sign of the Weeping Angel" is filled strangeness, of how when one is plunged into an unfamiliar environment – especially if it is a party of someone you don't know – the act of entering a strange space can put you in contact with nameless mysteries. Storm doesn't explain much here, and I feel this is the kind of story that will give you something different with the next read.

"Master of None" was dark. Horribly and wonderfully dark, and takes a stab at the consequences of someone addicted to New Age courses – and how the plethora of qualifications offered are at the end of the day, rather quite absurd. And yet the hapless protagonist, in her obsession with finding yet another certificate for her wall, stumbles onto something that is a little more than what she expected.

"In the Earth" was another that I adored. At its heart it's the story of childhood reminisces, and how our opinions of events in the past may be coloured over time. Once again, Storm effortless evokes the sense of old houses, the countryside, oppressive weather, and awkward interactions.

"From the Cold Dark Sea" brings a classic touch of Lovecraft, but with a more feminine angle. This is a journey, about an outsider offered a glimpse into a world that she may never be part of. And that is all I'll say. Once again, wonderful imagery, deeply evocative, involving the ocean and the life teeming beneath the surface and washed up on the shore.

"In Exile" is a story that offers a slice of life, yet another where an outsider is offered the opportunity to glimpse into a world that is not her own. Mabelise and her sister have been sent to live in a villa, where they are strangers on the island, and not privy to the true meaning of the rituals the locals enact. Mabelise's sister is there to recover from a serious illness, yet Mabelise has no real hope for her sister's healing. The women who are caring for them may have an unconventional approach, however.

"The Serpent Gallery" is a peculiar piece. It feels as if it has a contemporary setting, and yet there's a strangeness to it that pitches the story into oddness. I loved the unsettling descriptions of the mysterious paintings. I won't say more, for to do so would ruin the experience.

The last story, "The Foretelling" is, in Storm's own words, a Pre-Cataclysm tale of of Azeroth. She makes no secrets of her love of the World of Warcraft setting, and while it's not a setting I know all that well, I still enjoyed dipping into the world.

Posted by nerinedorman at 10:56 AM No comments:

The Reject by Edyth Bulbring

Edyth Bulbring brings her readers back to Juliet Seven's world in The Reject. Events in book one, The Mark, were left a little in the air, with Juliet escaped on board a stolen yacht with a price on her head while Mangeria was dumped into turmoil. There was no HEA for her and her love Nicholas. 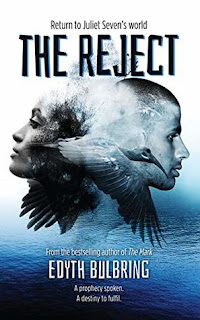 It's going to be difficult to review The Reject without massive spoilers, so I'm not going to discuss specific plot points. At its heart, this is a quest-novel, with Juliet aiming to return to Mangeria and reunite with Nicholas. Except the Fates have other things in mind for her, and she's blown far off course with two major side-quests, as it were.

The story isn't straight-up SF, but blends in elements of fantasy as well, so be warned that occasionally there are dream-like sequences involving beasts of omen, like hadeda ibises and yes, even a great white shark. This novel reads far grittier and darker than I expected – Juliet is a hard young woman, and most certainly a product of her environment. This means that she's not particularly likeable, but her strong will to survive and yes, her bitterness, make a lot of sense. She doesn't allow folks to push her around. Or if they do push, she will find ways to push back.

I did feel that the pacing was a little off with The Reject, but then Edyth does compress a lot of time in the story – and although there are events that take place, they are almost lost in a kind of narrative summary. My suspicion is that this novel suffers a little bit of what I term as 'middle book syndrome' where there's a measure of setting up for a book three. Not that I've heard whether a book three is in the works, but it wouldn't surprise me a book were to drop at some point in the future. The first half of the novel feels like a detour, offering important back story, before it gets on the move again.

There are some pop-culture nods that made me smile, which I suspect may go a little over the head of readers who haven't watched older films. But I enjoyed the intertextuality. I will, however, suggest that folks might reread book one before dipping into book two, especially if some time has lapsed since the last read – and here the fault lies with me, the reader. I was a little overwhelmed with the cast of characters and their relationships in the last part of the story, where things really start moving. I think if I were more solidly grounded in the context, this wouldn't have been so much of a problem for me.

The Reject offers a cracker of a story, and when it really gets going, it rushes at a headlong pace, perhaps sometimes a little too fast, in my opinion. I would have liked to have seen more immersion in the world, a bit more tactile, sensory input to flesh the setting out. But these were not dealbreakers for me. I enjoyed seeing Juliet's interactions with the people around her, the way she's often in denial about her own feelings, and also how she tries (and perhaps even fails) to do better than the people in her past who let her down.

Posted by nerinedorman at 10:20 PM No comments:

A Shadow in Summer (Long Price Quartet #1) by Daniel Abraham

A Shadow in Summer by Daniel Abraham is one of those fantasy novels that are difficult to quantify in  brief review. It's also an incredibly textured, layered story that peels away gradually, and stylistically clearly has its roots in an Asian-inspired setting.

The heart of the story is that poets control gods, otherwise known as andats, who are bound to do their bidding. The andat of the city of Saraykhet, Seedless, specialises in removing things, be it seeds from cotton or babies from wombs – and a "sad trade" as they call it is the pivotal moment that sets a series of events in motion as characters plot and plan around each other. If intrigue is your crack, then A Shadow in Summer will provide this in abundance.

I'm not going to go into all the characters, except to say that Daniel spends a lot of time laying the groundwork for future machinations – we have a rogue accountant, an accountant's assistant, a prince in hiding, and a poet-in-training. I'd never thought an accountant could have such a devastating adventure, but there you have it. There's young love, betrayal and disappointment. In essence, this novel reminded me a lot of Katherine Addison's The Goblin Emperor in that that we don't deal with any cataclysmic events, but there is a slow burn of unravelling events.

Book two is most certainly in my sights, and I'm glad I've had the opportunity to discover Daniel's tales. His writing is detailed and his worlds are solidly realised, and will appeal to fantasy readers who enjoy a slower pace.
Posted by nerinedorman at 11:33 AM No comments: