This is one of those books that I bought ages and ages ago that just lurked on my TBR pile, making me feel awfully guilty for years. I'd thought, at the time of purchase, that this collection was for adults, and indeed there was no indication on the cover that this is a YA read, but there you have it. This is YA fantasy. Not that I'm complaining, because the stories were of a consistently high quality. 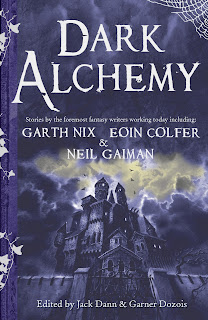 I admit there is only one reason that I purchased the anthology, and that was because of Neil Gaiman – my reckoning being that any anthology he appears in will be of a sufficiently high standard, and overall, I wasn't wrong in this assumption. His story, "The Witch's Headstone" is part of the same setting as The Graveyard Book and really is as charming and dark as any typical Gaiman tale.

Garth Nix's "Holy and Iron" goes back to the ancient conflict in the British Isles, stock standard fantasy fare and a tale underpinned by the bonds of blood ... and resolving ancient conflict.

Kage Baker's "The Ruby Incomparable" gave me joy, as it harks back to classic-style storytelling that is conscious of itself within the framework of a god-like storyteller. A very well developed voice.

It was lovely also to see a Peter S Beagle story here – "Barrens Dance" had all the wonderful mythic qualities that are hallmarks of his writing, even if I'll never be certain what exactly a shukri looks like, and maybe that's all right too...

"The Manticore Spell" by Jeffrey Ford also struck me as a stand-out piece, with much sorrow and beauty attached to it.

Of course Tanith Lee's inclusion with the story "Zinder" is a treat. She deserves far more mainstream recognition for her contribution to the genre over the years. The story itself is surprising, and takes twists and turns that I could not predict.

Oh man, and the Gene Wolfe story, "The Magic Animal", was lovely. I can see why the editors left that one till almost last. I stopped reading there as Orson Scott Card is on my DNR list due to his attitude towards LGBTI people. I know folks say that one should separate the art from the artist, but I cannot in good conscience read his work.
Posted by nerinedorman at 1:48 AM No comments:

Existentialism is one of those topics that the more you try to pin it down, the more it refuses; at least that is my experience of it. There is no "quick" way to explain the philosophy, but Richard Appignanesi has provided an oft-tongue-in-cheek volume here that, I feel, acts as a suitable introduction. Granted, most of the concepts he doesn't go into any real great depth, but it should be enough of a taster to provide groundwork for further reading. 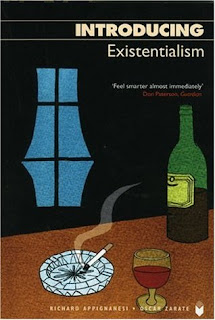 Central to what I can gather is that by applying meaning to life, we are in a sense boxing it in, restricting it, when all the different meanings that people might apply to one thing would differ. How I perceive a the colour red, will shift slightly from how someone else does, based on their own life experiences and innate subjectivity. Existentialism attempts to see things "as things in themselves". As we are, we are never aware of existence in its entirety.

The book also examines how it is possible for one to have "bad faith", and engage in self-deception, especially when considering the absurdity of life. And there is quite a bit of discussion on how essentially awful our existence is, because it is limited, and because we are aware of our own incipient mortality.

So, we live life without hope of appeal, in what can be described as a series of "present" moments. Are we a ghost in the machine, an illusion of self? Existentialism may also be about the destruction of boundaries between this illusion and the world around it. Being is that which happens to us, a stream of flowing "nows", and it is limited by time. So how is it that we do not plunge into nihilism? Are we condemned to mean something, not be it?

What I gather is that one should return to a living experience as opposed to trying to structure existence by imposing meaning. Of course I could also be horribly wrong, and need to spend more time reading on the subject.
Posted by nerinedorman at 10:25 PM No comments:

Shortlist for the 2017 Sanlam Prize for Youth Literature

Okay, so generally I don't just copy/paste press releases to my blog unless it's super awesome, and trust me, my precious dah-lings, this one's bloody super awesome. Yes, I'm a finalist for this prestigious award and I can't even begin to tell you how much the announcement has rocked my world. Those of you who're close to me know the many years' blood, sweat and toil that I've put into my writing, so to have gotten this far tickles me pink.

The story I wrote is about adventuring dwarven lasses who save their village from a rampaging dragon. And there's a witch. And a really cute baby dragon. And loads of action. And girls who don't want to be pigeonholed, and who want to be heroes... on their own terms. And, and, and ... You're going to have to read it when it's eventually ready.

A huge-ass congratulations to the other finalists! Now, to survive until October.

Oh, and have a celebratory sparkler. 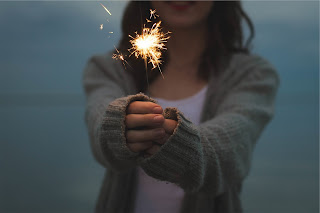 SHORTLIST FOR THE 2017 SANLAM PRIZE FOR YOUTH LITERATURE ANNOUNCED

Sanlam and Tafelberg are proud to announce the finalists for this year’s Sanlam Prize for Youth Literature. Six finalists are included in each category: English, Afrikaans and African languages. The total prize money amounts to R54 000: R12 000 for the winner (gold) and R6 000 for the runner-up (silver) in each category.

The finalists in the English category are:
Nick Wood from London;
Nerine Dorman from Welcome Glen, Cape Town;
Lesley Beake from Stanford;
Joanne Hichens from Muizenberg;
Erna Müller from Windhoek; and
Jayne Bauling from White River.

The finalists in the Afrikaans category are:
Nellie Alberts from Calvinia;
Annerle Barnard from Bloemfontein;
Jan Vermeulen from Despatch;
Carin Krahtz from Centurion;
Riana Scheepers from Wilderness; and
Jelleke Wierenga from Napier.

The winners will be announced in October 2017 and the prize-winning books will be available in bookshops and in e-book format shortly thereafter.

The Sanlam Prize for Youth Literature was launched in 1980 and is awarded every second year. This year Sanlam introduced the “250 Words a Day” campaign to make the competition more accessible to young and upcoming writers. By joining the “250 Words a Day” group on Facebook, entrants had access to a panel of renowned authors who acted as writing mentors. To motivate would-be authors to complete their manuscripts before the closing date of 7 October 2016, they were encouraged to write 250 words every day. Author and mentor Page Nick says she loved being part of the project. “The thought of writing a whole book all at once is overwhelming, but breaking it down into chunks makes it much more doable. Congratulations to every writer who finished a piece and submitted it to the competition, it's a huge achievement.”

Apart from making the competition more interactive and reaching a broader audience, the total amount of entries grew by 60 from the previous round.

"As Wealthsmiths, we have a deep understanding of and respect for what it takes to turn the twenty-six letters of the alphabet into something of great value.  The Sanlam Prize for Youth Literature celebrates writers’ ability to make the most of what they have. Their books create enriching experiences for our youth and have the ability to take readers on journeys that will make them cry, or scare them, and to places that will stay with them forever," says Elena Meyer (Senior Manager:  Sponsorships for Sanlam).
Posted by nerinedorman at 12:58 AM No comments:

What Joanne Macgregor does well is get inside the heads of young adults, and she does so admirably in Scarred. Some people carry their scars on the outside, and for others, though they may appear perfect from the outside, they carry their wounds deep within. 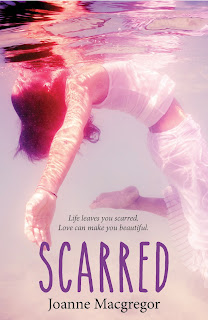 Sloane Munster (and here I was nearly groaning at her surname) was in a horrible car accident in which her mother died. And since then she's been struggling to come to terms with not only the loss (and their relationship had been far from perfect) but also dealing with the disfiguring scars that mar her body. Knowing how important outward appearance can be for young people, this is especially tragic.

Yet Sloane gets by. But there's more guilt to heap on top of things. She has the hots for Luke Naughton, the somewhat arrogant swimming star. But, as we discover, there are Reasons (with a capital R) why Sloane can't be completely honest with Luke about her past. And Luke himself, has Reasons (yes, I'm being deliberately vague because SPOILER ALERT) why he might not accept Sloane for who she really is.

So it's a dance between these two lovely, damaged souls and the push-pull of their attraction for each other in what is a very deftly handled teen romance with a side order of drama. But it's more than just a romance; it's also about how we discover ways in which we continue with life after tragedy, scarred but still alive, still trying to assimilate the fragments that remain.

But Macgregor also treats other issues, such as school bullying, and how different people either fracture or become more resilient in the face of others' cruelty. So yes, there was a bit more going on in this book than your stock-standard YA read, and I commend the author for that (and it's also the reason why I award her a full five stars).

We are never whole again (if we ever were to begin with) but we have no choice but to continue, because life isn't fair.

Okay, so far as reviews goes, I'm getting meta here, which is a bit more than I should be.

The setting is generic USA-ville, though there is a part of me that would have wanted to see a more regional, local flavour to add a bit more dimension to the story (but I understand why the author made the choice). Yet this is a solid read, and the characters have authentic voices, even if I wanted to shout at them to stop being so pig-headed. If you're looking for your next contemporary teen read, this is a goodie. Pick it up; it won't disappoint.
Posted by nerinedorman at 1:09 PM No comments: