The Count of Monte Cristo by Alexandre Dumas

I won't lie. It took me forever to read The Count of Monte Cristo by Alexandre Dumas. This classic is heavy going, and some understanding of French history during the Napoleonic era won't hurt. I will also admit that I cheated a little and watched the 2002 film adaption of the novel that stars Jim Caviezel and Guy Pearce. I can understand why the scriptwriters made some of the decisions they did. This is a big story, filled with numerous subplots. 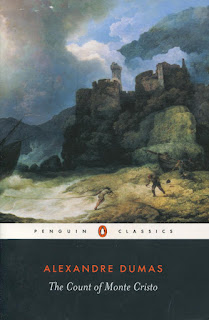 The short of it is that the young merchant sailor Edmond Dantès has a bright future, except that he is brought down by three people he considers friends, who envy his potential. He is locked up for many years in a prison, his identity all but erased, and during that time his betrayers all become highly successful people – one of them even marrying Edmond's beloved Mercédès. While incarcerated, Edmond befriends a fellow inmate, who not only teaches him but bestows upon him the location of a vast fortune. When Edmond eventually escapes, he sets himself up as the rather Byronic Count of Monte Cristo, who returns to Paris to exact vengeance on all who did him wrong.

What follows is an epic monstrosity of a novel bloated with subplots and a vast horde of characters to make readers dizzy with all the names and relations if they don't keep notes on the side. How Dumas kept it all straight, I don't know. In other words, this is not a novel I'd suggest abandoning for a while then try to pick up again. You won't just have lost the plot, you'll have dropped it in a fathomless well without any hope of recovering it.

Dumas is a keen observer of human nature, and for that reason alone it's worth reading this novel. I suspect the convoluted plot was created precisely so that he could revel in the complicated dance he wove for his characters. One thing that did annoy me, and perhaps it is because of the writing style itself, is that he writes in a shallow third person that verges on omniscient – sometimes addressing the reader. This is purely a writing convention that's a product of its time, but if you're looking for a deeper understanding of a viewpoint character's inner workings, you're not going to get it here – Dumas is deliberately mysterious, often, in order to maintain suspense.

As a template for designing a complex narrative, The Count of Monte Cristo is rich for the pickings, and in that regard I do recommend it to authors who're looking for ideas. I certainly learnt a lot from this. Just be warned, this is not exactly a novel you'll read cover to cover in a week.

PS, you can pick up a free copy of this over at Project Gutenberg.
Posted by nerinedorman at 5:53 AM No comments:

The Rising Tide, which is part two of Helen Brain's Elevation series, continues the tale of Ebba den Eeden, the mistress of Greenhaven. The setting is a post-apocalyptic future where the rising sea levels have turned the Table Mountain range into a series of islands cut off from the African mainland. If we'd hoped that things would be simpler for Ebba after she defeated the High Priest, we're sorely mistaken. Her actions have inadvertently ushered in an era where her region suffers military control. Everyone wants Greenhaven – it has the most fertile land – and Ebba is hard pressed to meet the demands placed on her. 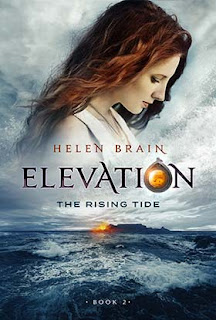 What follows is what I'll affectionately term as "Ebba makes one bad decision after the other." In fact, I wanted to slap her upside the head to knock some sense into her. I agree with Aunty Figgy that boyfriend Micah is Bad News, but of course Ebba is so hopelessly in love with the chap that she's willing to let him distract her from her true goal: that of uniting the mysterious missing amulets and saving the world from catastrophe. (Then again, if I consider how boy-mad I was at 16, I forgive Ebba to a degree.)

That bloody Micah has it in his head that he's going to lead a rebellion, even if it means placing everyone on Greenhaven in danger. And I'm pretty sure Ebba has all the right of it to worry about Micah hanging out with the luscious and conniving Samantha Lee. Poor Ebba doesn't stand a chance – it's in this instalment that her sheltered upbringing in the Colony truly hamstrings her as she flounders about trying to do the right thing. (And making more of a mess while she does.)

There's a smidge of "middle book" syndrome at play here – with plenty of foreshadowing for things to come in book three, I'm certain. I spent a lot of my time saying, "Ag no, Ebba, don't." Her limited vision in terms of how she's manipulated by other people and how hard she tries to please other people to the detriment of her own goals grated on me after a while, and I'm not sure if she redeems herself in my eyes by the end. Here's hoping for book three.

What I love about the Elevation trilogy is the fact that the story is unconventional in terms with what I'm accustomed to when it comes to YA. Helen's characterisation, especially in dialogue and the way people are constantly at cross purpose with each other feels authentic. I'm also so pleased for her that she's also signed a lovely big contract that will see this trilogy hit overseas markets. Her voice and her world building is fresh and the story is engaging. I'm looking forward to the next instalment.
Posted by nerinedorman at 11:35 AM No comments: