The Hobbit, or There and Back Again, by JRR Tolkien, read by Andy Serkis

My first encounter with JRR Tolkien's The Hobbit came when I was around six years old, and my mum picked up a paperback copy from which she read parts of to me. I do admit I was probably a little too young to appreciate this, back then, but I did go on to reading the book on my own when I was about 11 or 12. Which is also when I plunged headlong into The Lord of the Rings and knew from that moment that I wanted to be a fantasy writer. 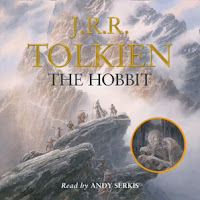 I'm always somewhat baffled when people complain that The Hobbit is boring, but hey, there's no accounting for people's taste. But what I will say to those of you who didn't quite gel with the reading, do give the audiobook narrated by Andy Serkis a try. It's my firm belief that some fiction only truly comes alive as the spoken word, and in this case, The Hobbit is a prime example.

Tolkien is a master of the third person omniscient, so often interrupts the main flow to give a little of his own opinion – and sometimes the references to things from his own time, like football, can be a bit jarring. This is especially the case considering that the conventions of present day fiction favour a limited first- or third-person point of view. So I'm guessing the 'narrator voice' of the author might be off-putting to some readers (though I do believe that they don't quite know how to articulate this, judging by the reviews out there – worth a laugh and an eye-roll if you're trawling to see the one-star reviews for The Hobbit.)

But Andy Serkis as a narrator of this book surpasses himself. His minute details in characterisation, for everyone from Bilbo and Gandalf, to Smaug, and of course the Gollum we all know and love, are an absolute delight. This is the unabridged version of the book, so we're looking at plus minus 10 hours of entertainment, and I'm beginning to wonder if Peter Jackson shouldn't have just stuck to the plot instead of his mangling of the film adaption of the book. Because yes, there is enough content for three movies here, if you look hard enough.

This is most certainly one of my audiobook highlights of the year, and I cannot recommend it enough. Serkis is an absolute treasure and he has without a doubt done justice to JRR Tolkien's legacy with his reading.

Posted by nerinedorman at 11:29 PM No comments:

There's a lot to unpack with Eugen Bacon's Ivory's Story, which is due out from NewCon Press which is due for release on December 8, 2020. First off, if you're expecting a narrative that will spoon feed you in stock-standard A-Z fantasy adventure, this is most likely not the novel for you. 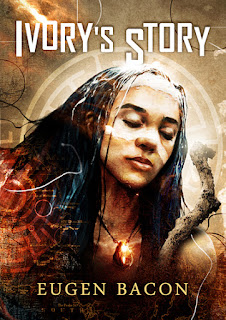 Instead what we have is a vibrant, vital collection of threads that is part murder mystery, folk tale and out-and-out wild fantasy that segues into dream-like sequences. There's a bit of a heroine's journey here, as the main character police detective Ivory Tembo embarks on a quest to not only solve a real-life murder with inexplicable violence in Sydney, Australia, but she must unravel her heritage too.

I'm going to sing praises for Bacon's prose, because her style is colourful and lyrical, and lends itself to being read out loud since she carves out some beautiful imagery with her words. And yet by the same measure this does also obscure the meat and bones of the story so that it is at times difficult to immerse in the narrative, which is at times lost in the vast imaginative leaps that she takes. The short sections within each chapter do create a choppiness to the overall flow, but if each of these is savoured for what it is, it is possible to focus on the isolated cells within the whole that stand out.

Bacon draws heavily on various cultural heritages, blending her telling into a style that is flavoured with both Africa and Australia, in a gloriously culturally postmodern mix. If you're looking out for an epic tale that will certainly stand apart from your usual fare, that is written with great passion and feeling, this one may well hit the mark.

I'll start off by saying that Incursion, book 1 of Lauren L Garcia's Catalyst Moon series gave me serious Dragon Age vibes – so much so that I'm sooo tempted to wonder if this is an incredibly well-crafted fic that had its serial numbers filed off. And to tell you how much I loved this book, I immediately went out and purchased book two (which is a rare occurrence for me when I'm considering books for review). 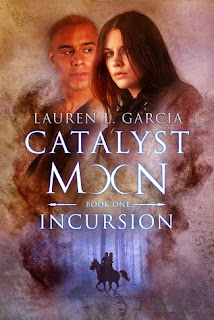 In this world, magic users are reviled and locked up in bastions that are guarded by templ— Sorry, sentinels, who chug lyr haematite that boosts their powers to stop mages from acting out. Honestly, the similarities in the worlds did not bother me so much, because a) I'm a huge fan of Dragon Age and its tie-in fiction and fanfiction and b) Garcia's writing is lovely.

We meet Kali, a mage, who is being transferred to another bastion so that she can have her bad knee looked at (not all mages are equal in their powers, and she's hoping that someone at the bastion will have a better grip on healing magic). Plus, her friend is there, and they haven't seen each other since forever.

Of course no plans go without a hitch, and her party is waylaid by demon-possessed barbarians who pretty much decimate their patrol, leaving only Kali to escape with the young sentinel Stonewall. And her magic has ways of its own that result in a wild escape that sets them practically on the other side of the map. Now they must journey back to the bastion, and learn to trust one another in an often hostile environment.

Meanwhile a mage rebellion is brewing... Of course.

What I love about Garcia's writing is that she brings in the human element with all her characters – we see both mages' and sentinels' points of view, and it's easy to understand where both stand on the divide. All the while I was cheering on those who were able to build bridges rather, but by equal measure curse those too myopic to see the bigger picture – because Garcia lays plenty of seeds hinting at a bigger, brewing danger. If you're looking for a fantasy adventure that focuses on the human elements of magic vs. non-magic conflict, then give Incursion a shot. She has created a varied cast and I'm so curious to see how all the secondary characters' story arcs will pan out.

Posted by nerinedorman at 12:38 AM No comments: