City of Masks by Ashley Capes

City of Masks (Bone Mask Trilogy #1) by Ashley Capes is one of those review books that has been languishing in my Kindle app for far too long, so I pressed on and finished it. I have mixed feelings about this book. On one hand I really, really wanted to like it because the world that Capes introduces us to is rich in lore. We have Anaskar, a port city, that is guided by those who wear the Greatmasks – objects of power that imbue the wearer with certain powers. We have the Mascare – an elite secret police, masked of course, who police the city. The society itself is almost Venetian in its Machiavellian power struggles as people attempt to work their way to literally living in the top tier of the city. 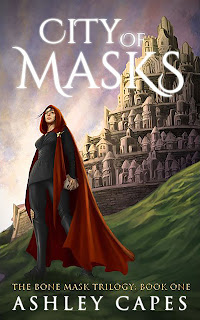 Characters are certainly diverse as they are fascinating – we meet Sofia, who's caught in the middle of an awful betrayal. We have Notch, an erstwhile city guard now reduced to Mercenary. We have the mysterious innkeeper Seto, who is most certainly more than he appears to be. Flir is an exceptionally strong woman. As in supernaturally strong. I won't spoil where she gets her powers. Throw all these misfits together, and you've certainly got an interesting dynamic going. Add in a few mysterious dangerous beasties too, as well as a pair of tribesmen on a holy mission ... and things become downright chaotic.

Look, the story was interesting. I never once wanted to throw the book across the room (besides breaking my iPad) but I felt that many of the important plot threads didn't *quite* hang together as nicely as they could have. I can see there were touches were a little foreshadowing happened, but this seemed slightly tacked on and by the by, and nearly coincidental. I wanted more. This book could have been about a third longer just so that the threads could have been a lot more strongly woven more thoroughly enhanced, deeper. Characters sometimes behave in ways that lack sufficient motivation as well. There are odd little bits thrown in that don't quite go anywhere. Or events that are not quite fully explained, though I hope they are developed in the books that follow.

Is this a worthy read? Yes. I'll add that some of the stuff that bothered me was the kind of stuff that I'd have caught while doing an assessment. I couldn't quite take off my editor hat while reading, which suggests that this novel could have been pushed a bit harder during editing. But it's not a deal breaker. I was still engaged. I still cared about the characters, and to be quite honest, this will most likely not even bother most readers.

There is a rich world here, full of interest, and City of Masks has moments where it shines, which makes it a solid read for those who love fantasy with a sense of immense lore and layers of mystery.
Posted by nerinedorman at 2:16 PM No comments:

This was totally meant to be the September fanfiction round-up but then I wanted to finish this massive AU Solavellan fic called Schooling Pride by AnaChromystic. I’ll give a big-ass disclaimer and say that I normally *don’t* do AUs, but this one tickled me. The writing’s not perfect. My inner editor wanted to slice and dice because the pacing is a bit uneven in places, but considering that I stuck it through to the end, the payoff was great. There’s no magic in this modern Thedas, and Solas is the adopted scion of a messy, horrible wealthy family. The story is all about how an initial hate-fuck with a rebellious Ellana Lavellan turns into something deeper, and how together they help him break away from his abusive family. The ending gives all the feels. I’d hazard to say that this deviates so far from lore nearly all the serial numbers have been filed off, but I still found something oddly compelling about this piece, and the writer gives a lot of emotional depth.

PridetotheFall is a writer I’ve been following for a while on AO3 and I was super happy when I saw that they’ve got a new piece up. Ashes and Embers is a one-chapter piece that takes us right to the beginning of the events transpiring in Inquisition. Major plot spoilers: If you’ve not finished Trespasser, then for the love of dog don’t read this story. It’s told from Solas’s point of view. Enough said. For those of us who’re madly and passionately still in Solavellan hell, this story is *just* right. Everything about this story is perfect. The nuances, the layering, the descriptions. Hell, this writer can (and probably should) think about writing original fiction and trying to put themselves out on the market. Enough gushing. Go read it if you think this will be your thing. It’s part of their Beautiful Chains series, which I’m now going to go finish.

It was Cullen Appreciation Week recently, so my friends Sulahn and withah collaborated on a piece called Strange Behaviour – which I then beta-read. I’m a huge Cullen fan (you wouldn’t think so, but jawellnofine, I won’t lie) and this piece nails our favourite Commander’s tone perfectly. It’s a sweet bit of LavellanXCullen warm fluff.

And of course I’m totally enjoying part two of withah’s Warded Heart series – especially wonderful for all the Cullenites out there. This story picks up with Cullen and the Hero’s happy-for-now as they navigate their new marriage and the little one on its way in the midst of the events that transpire during the battle with Corypheus. Not the best time to be raising littlies… But what I love about this story is the way the two characters are often at cross purposes because of their outlooks on the mage/templar conflict.

That’s it for now. If you have any pieces to suggest, mail me at nerinedorman@gmail.com 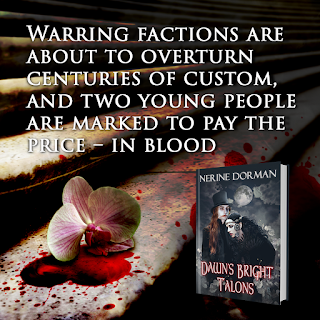 Posted by nerinedorman at 11:31 AM No comments: