I'll start by saying that Grace Draven is one of the authors who's on my auto-buy list. Eidolon is the second book in her Wraith Kings series and continues the tale of the unlikely couple of Brishen and Ildiko. Now, more than ever, their mismatched marriage between Kai and humankind will be tested as a horde of demonic galla ravage the lands, Brishen is the only one who holds the power to stop them. After all, it was his scheming mother Secmis who inadvertently released the awful things. 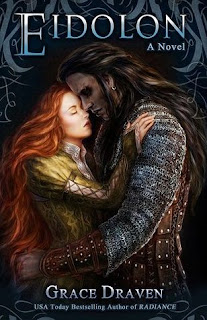 As always, Draven conjures up a rich world with a detailed heritage. We get the impression of much history that has passed, that still affects the characters to this day. There is ancient magic and intrigue aplenty, and while romance is a strong element in all Draven's writing, it never feels out of place or overemphasised to the detriment of the plot.

Her realisation of a functioning magical system is plausible, which is a big deal for me in any fantasy novel, and she manages more than one narrative arc expertly. Granted, I'd have liked to have seen a bit more development in terms of try/fail cycles for individual characters, but that's a minor niggle from my side, because at its heart this is gothic fantasy that hits all the right buttons for me.

What I like best about Draven's writing is the effortlessness of her style, and especially the relationships between the characters – there's an authenticity to their interactions which I appreciate, in addition to the often lively dialogue. It's not so much the manic, plot-driving scenes but also the quieter bits in between where you glimpse characters imply *being* with each other.

Eidolon is an enthralling fantasy read, that ticks the boxes in terms of quests, mystery, magic, and enduring love.
Posted by nerinedorman at 1:11 AM No comments:

With a dearth of traditionally published speculative fiction in South Africa, I'm tickled pink to get hold of NR Brodie's Knucklebone*. I've been reading her non-fiction for a while, and I love her style, so I was dead keen to see what her fiction would be like, and I was not disappointed. 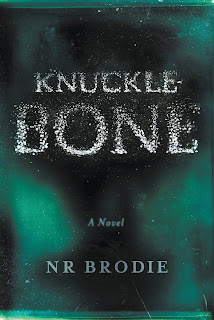 Set in Joburg, Knucklebone is a fast-paced occult-noir primarily from the point of retired cop Ian, and his unintended partner Reshma, as they are plunged into a shadowy world of witches, sangomas and poaching/animal parts smuggling rings.

Brodie brings her setting to life with a large, varied cast of memorable characters, many of whom have in-your-face attitudes that I enjoyed immensely. Her writing is precise without losing the ability to evoke, and she keeps her chapters short, so the story moves along at a breath-taking pace. So if you're like me and don't have extended periods to read, this novel is perfect. Of course, if you're anything like me, you'll be tempted to read just one more chapter before bed.

The brevity and fast pace does have its down side, however. While the story picks up pace as it winds to its conclusion I feel that it loses some of its impact near the end with the introduction of a whole passel of new characters who all play small roles before exiting stage left. I understand that they each contribute to the resolution, but gained the sense that it diluted some of the punch that the climax would have had, especially for Ian as a central character. I'd have liked to have seen a bit more development or, failing that, a paring down of the number of characters.

This being said, it was not a dealbreaker for me, since I was already on board for the ride. Brodie dips into South Africa's melting pot of cultures to produce a story that dances with many traditions, both African, Eastern and Western, and the end result is a delicious melange. Knucklebone is the kind of novel that will appeal to lovers of both fantasy and thrillers, in my opinion, and if you like your fiction with a more than healthy dollop of magic, then dip into this one.

* This is a hint to South African publishers that there are oodles of talented SFF authors in the country worth investing in, so do open your doors to queries in these genres.
Posted by nerinedorman at 12:27 PM No comments:

The first thing that sold me on Daughters of Forgotten Light by Sean Grigsby was the cover – good goddess that's some amazing design right there. The second thing was the title. Then I read the back cover blurb, and I was all over the idea of the story. In a nutshell, it seems as if the earth is rapidly headed towards another ice age; nearly all the men are at the front fighting a war neither side can win; and to combat overpopulation, mothers are given the authority to ship their daughters to a prison known as Oubliette. 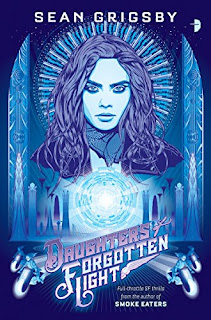 As the name suggests, this is a one-way trip. Once they arrive at this space station that initially began life as an estate for the fabulously wealthy, they're left to fend for themselves a la Lord of the Flies. The only responsibility earth takes is to send shipments of "manna" with the next batch of "shippees". Carnage ensues.

What the government didn't bargain for as these women on Oubliette forming a complex social hierarchy and functioning society (after a fashion), using what available technology exists to craft their own tools, weapons and vehicles.

The story is told primarily from the point of view of Lena "Horror" – the leader of the gang the Daughters of Forgotten Light gang on Oubliette, and Dolfuse, a senator back on earth who suffers incredible remorse for having shipped her baby daughter. Both women are leaders, railing against an unjust system, but from opposite ends.

What I loved: The world building. I'm not a huge one for SF – as in I'm incredibly picky about what I'll read – but I really loved the setting. I admit I wasn't hundred percent on board with the way earth's social structure had shifted, but it was a refreshing change from my usual fare. Grigsby piles on the action with a vivid cast of characters. Sarah Pao with her genetically modified blue hair and attitude was one of my favourite characters. This story moves along at a cracking pace, and readers are never allowed to get too comfortable.

On the downside, I feel as if the assorted narrative threads could have been developed a bit more – I finished with the wish that there could have been further depth, that each character didn't quite get the full sense of being pushed to their limits. Perhaps there was too much emphasis placed on the fulfilment of the outer journey rather than the inner. So this was me hovering between giving four or five stars, so I'm going to settle on five, because this was still, in my opinion, a cracking read that I enjoyed thoroughly. And it's a book I'm not going to forget in a hurry. Grigsby's dystopian vision is an adrenaline-fuelled romp with more than enough speed and ultra-violence to satisfy those of you who enjoy their Tarantino with a side order of Sons of Anarchy but on fancier motorcycles.
Posted by nerinedorman at 12:00 PM No comments: