In the spirit of mixing things up, I downloaded Authentically Mexican by John Paul Brammer, which was included in my Audible subscription. It's not a long audiobook, but in terms of it being vastly different from the cultural slant I'm accustomed to, it nevertheless offered a slice of novelty for me. 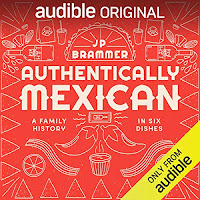 I admit that I struggled a bit with the narration – Brammer reads his own work, and he has a particular upward inflection that annoys me. So it took me a bit to get into the audiobook. What I did love was his discussion of identity – something I do relate to a lot. Brammer stands in a cultural no-man's land somewhere between his Mexican and American heritage, and most of the book is about how he tries to bridge that gap and find an identity that is uniquely his own – by digging into his Mexican roots through food.

His family is anything but standard, but what shines through is Brammer's love for his grandmother and the recipes that underpinned his world. This book is part discussion on food, family, cultural heritage, and identity, and how all are inextricably linked. Joy, sorrow, and nostalgia mingle in a way that you can almost taste and touch the meals discussed. As a South African, the chances of me ever getting to eat any of the foods mentioned here, as cooked authentically across the pond, are slim, but I do feel like I've stepped away from this reading with a better understanding of the complexities of a culture that is vastly different from my own yet has some universalities that transcend culture geographic separation.

Posted by nerinedorman at 1:12 PM No comments:

For many years, Julius Caesar was a cartoon character for me – I admit that I learnt to read by paging through dog-eared copies of Asterix and Obelix comics. But of late, in my increased delving into history, my fascination with the Roman empire has grown, perhaps because some of the juicier bits involve Egypt. Also, as an author of fantasy fiction, I'm a huge believer in gaining an understanding of things of a more military persuasion. Caesar's Legion by Stephen Dando-Collins, which is well narrated by Stuart Langton, certainly gave me a much deeper understanding of the Roman legions, and also the machinations of the empire itself. 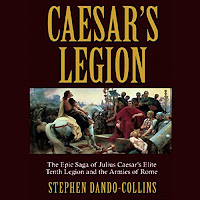 Although the work focuses most on the doings of the renowned Spanish Tenth Legion, we get a broader picture of the Roman military in general, as well as the conflicts from within and without the empire. Love him or hate him, Julius Caesar really was a force to be reckoned with – and there's a reason why he's been immortalised in our cultural objects. While Dando-Collins does enact some dramatic license in this work, he nevertheless leans heavily on existing primary sources – so if you're looking for a meaty engagement with the topic, this is pretty darned good, giving everything from how the legions ordered their camps all the way to the many campaigns the legions were engaged in.

Empire building is a tricky business, as we discover. There are the struggles at the beginning, the glory days, and then the inevitable slow winding down. While it can be argued that imperial powers do a lot of damage to the smaller cultures they assimilate, empires also build something that is bigger than the sum of all their parts – and we still see echoes of Rome in contemporary Western culture to this day. Caesar's Legion is an incredibly useful resource to anyone fascinated by this culture, and if I ever do lay hands on a printed copy, it will be part of my permanent collection. If you're a history buff like me, or simply someone curious to learn more, this is an excellent resource.

Posted by nerinedorman at 1:00 PM No comments:

Origins: The Search for Our Prehistoric Past by Frank HT Rhodes

I was one of those kids who grew up watching way too many National Geographic documentaries at a child, so every once in a while I still love to indulge in content that will not only prove to challenge me, but also broaden my understanding of the natural world. Origins: The Search for Our Prehistoric Past by Frank HT Rhodes, narrated by Derek Perkins, is one such title that, as the the name suggests, digs deep into the origins of life on our planet. 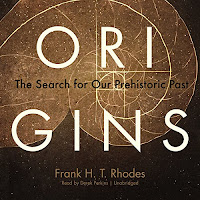 This is an ambitious work, and the periods it covers is vast, but what I really appreciate about it is that it really put into perspective our position as a species when viewing the vast history of life on Earth. Truth be told, our existence as member of the family of great apes is a mere addendum when all is considered. In evolutionary terms, mammals are pretty much latecomers on the planet.

Rhodes not only delves into the history of life on earth, and all the multiple theories and hypotheses lying at the root of our understanding, but he also tells the story of the very early geologists and palaeontologists whose life works contributed to the theories that are currently accepted by the majority of scientists this day. Great care is taken into explaining how the theory of evolution functions, as well as how the taxonomy of living things is executed. It doesn't matter if you know next to nothing or, like me, are an armchair enthusiast – you'll get a wonderful broad overview that acts as a springboard for further study.

To be fair, this is such an enormous topic to cover, but I do think Rhodes does admirably well to paint in broad strokes – especially when it comes to explaining how evolution works. What I appreciated also was the way in which he touched on the reality of extinction, examining the mass extinction-level events or circumstances of the past, as well as reminding readers of the essential ephemeral and somewhat tenuous nature of life.

The only downside to listening to the audiobook is that you don't have ready access to any of the accompanying diagrams or illustrations that you'd find in the printed book, but you can download a handy reference guide as a PDF from the Audible website if you're of a mind to delve deeper.

Posted by nerinedorman at 10:23 AM No comments: