I am *so* excited to introduce Kevin E Green, a UK-based actor who'll be narrating the audiobook version of my revised edition of Inkarna. The novel's been out of print for a number of years now, but I'm currently working hard to bring out the sequel, and for that to happen, it's meant that I've had to roll up my sleeves and spruce up book one too. I'll be welcoming a whole host of new readers to the world of Those Who Return.

But first, a little about Kevin... 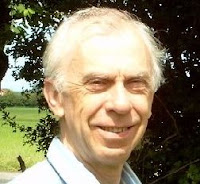 "I started narrating in earnest when I took early retirement some years ago. I have since narrated over 70 books covering all genres from steamy romance to psychological thrillers, plus a number of non fiction. I have over 30 years acting experience which helps in voicing and characterisation. I think my favourite genres are murder mysteries and thrillers.  My background before retiring was in science and engineering, so I have no problems narrating technical non-fiction! I live in Lancashire, England with my wife Dianne and our dog Rupert. See kevthegreen.co.uk"

Posted by nerinedorman at 10:24 AM No comments:

The Ventifact Colossus (The Heroes of Spira #1) by Dorian Hart

With fantasy in general being rather grim and dark these days, it's quite refreshing to encounter The Ventifact Colossus by Dorian Hart. This is the kind of book that reads like your typical D&D campaign, but with a slight Disney-esque flavour to keep things from getting too heavy. Magical McGuffins, check; wizards, check; weird beasties, check; a flying carpet, check. Dorian also does what so many authors struggle to do – balancing a story where there are multiple viewpoint characters, and giving each a unique voice. I'm team Morningstar all the way, just so you know.

The gist of the story is that a ragtag of eight random characters who seemingly have nothing that makes them remarkable, are drawn together by a wizard's spell for the purpose of saving the world. All are, to a degree, rejects or your average joe, thrown together to do the extraordinary, heading off on quest after quest while hoping to find all they need to stop the Big Bad. It feels a little like a lower-deck story, but I suspect in subsequent novels in the series, that the characters will really come into their own.

I can't say much more other than this was a fresh-faced, fun story that although I struggled to suspend disbelief with certain events near the end, I was overall entertained. And I'd say that this is also a novel that you can happily pass on to even your teen readers. This feel-good adventure has a sincerity to it that I've been missing in fantasy of late. It may be too light for some tastes, but it's just right if you're in the need of reminding that the world is not all doom and gloom.
Posted by nerinedorman at 10:52 AM No comments: