Big disclaimer: I'm on the list of bloggers for a number of publishers and sometimes print books wash up on my shore that really aren't my thing, but I'll give them a fair review. 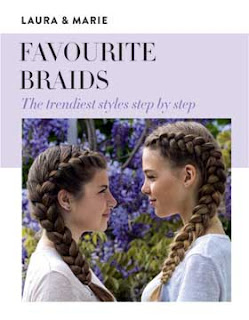 Okay, for those of you who know me, they'll be well aware that I'm not big on the whole hair and make-up thing. My hair is long and mostly loose, mainly because I'm not bothered with doing exciting things with it. There are days when I strangle it into a bun because it annoys the ever-loving hell out of me. If I were into doing all manner of braids, Favourite Braids by Laura & Marie would most certainly be useful. (And I mean, with hair down to my butt, I really should look at doing something more exciting but who'm I kidding? When I go out, I wear my top hat 'cos that's my vibe and the hair must maar hang and do its own thing.)

Yet, this book is filled with some suitably awesome, elaborate hair styles, as well as the step-by-step instructions and photos to guide you into making them or at least give you plenty of ideas (if you're a budding hair stylist in the making). But I'm not that girl (though I'm sure they're out there.)

My main beef with the book is its design. Here my critic is creeping out of the woodwork to say that whoever designed this book is still stuck in the 1990s with the choice of fonts, colour palette and layout. But if you look at what the purpose of the book is, and the fact that it's probably marketed towards preteens who're not particularly savvy with YouTube and the Interwebz then this is a fun book. I can see this in a school library, for instance. Or it might be the kind of gift a well-meaning aunt or grandmother would gift to a girl who has an interest in hair and beauty. Or a girl she thinks is interested in hair and beauty...

(I was that girl who who had read The Lord of the Rings twice at the age of 12, can't you tell?)
Posted by nerinedorman at 2:37 AM No comments:

A coming of age story involving young love and a mysterious music, coming from a crystal radio left as a memento by an absent father, that leads a young heroine deep into a hidden world. 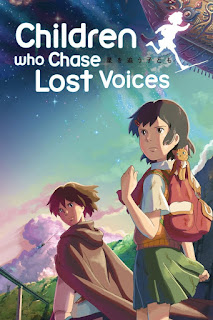 Also know as Journey to Agartha, this film, written and directed by Makoto Shinkai, is one of those that punched me right in the feels. Strongly themed along the lines of Orpheus's decent into the Underworld, this is a story about a young girl, Asuna, who inadvertently stumbles into the secret world of Agartha with its ancient, crumbling mysteries.

Generally I steer clear of your bog-standard anime, but Children Who Chase Lost Voices (which we caught on Netflix) resonated with so much mythic gravity and such strong story writing, that it begs a second look. I gained the sense of startling depth in world building with a solid mythos. Though on the outside, this is very much a young girl's coming of age story and her dealing with her absent father, it is also very much a tale about how one comes to terms with loss through death.

While I'm no fan of cute critter side-kicks, Mimi the cat was adorable while being suitably pesky, and her own story arc was apt, and I won't say any more for fear of spoilers. Characters all have strongly developed narrative arcs that interlace well, and have satisfying conclusions.

The production is exquisite down to every last detail, and the plot gradually unfolds, taking you from the everyday to the absolutely downright fantastical to the point where I was watching with the gooseflesh creeping up my arms. I will add that up until now, my experience with anime has been (mostly) limited to a few Studio Ghibli films, so I don't have much of a repertoire to draw on in order to make comparisons save to say that this compares favourably to the likes of Spirited Away and My Neighbor Tortoro.

Also, I really need to watch more quality anime, so if you have recommendations, please feel free to make them.
Posted by nerinedorman at 9:54 PM No comments:

The Crossroads by Calyah, a review

Ever since KeeperLavellan over at AO3 gutted me with her Solavellan hell in Apotheosis (seriously, go read it and its Dark Solas companion piece) I've been struggling to find another F!Lavellan/Solas piece that works for me. Or, even as I've later developed an unfortunate fixation on the Sentinel Abelas (and how do you even name that ship?) I've enjoyed seeing how writers bring his story out of the brief encounter in Mythal's temple.

I guess so. Google can't be wrong.

Anyhoo, so somehow I stumbled across the writer Calyah, and she'd started writing a rather sweet Abevellan, but then I think she hit the same speed wobble loads of writers did after the Trespasser DLC that knocked our entire storylines sideways. Now, some may gamely have continued with their headcanons despite everything. Others, like Calyah, took down her chapters and revised.

At the time, I remember being quite put out (and more than a bit worried) as I'd thought she'd just deleted the fic. But no. She cam back. Better and with so much bite. She has grown tremendously as a writer when I compare the earlier piece in the series to what she has going with The Crossroads.  Essentially, this is a retelling of the Trespasser DLC, with a whole lot of author headcanon and retelling of the main storyline, giving Abelas and his fellow Sentinels a far more active role in opposing the Big Bad.

And it's every bit as awesome as you can imagine. And satisfying.

If I'm going to nit-pick, I'll mention that there were a few little wibbles and wobbles with grammar and typos et al, but not so much to make me grumble or grouse because the story had me scrolling down, dead keen to see how Calyah was going to let things play out. Her action sequences are exhilarating and the emotional tension strong with few places where the pacing flags or the ball gets dropped. (At any rate, the rough patches didn't bother me – this is still one of the better Solavellans out there.)

And the payoff at the end. Yussss, it was bloody perfect and well worth the wait. The happy-for-now is a perfect set-up for if she should feel the need to leave the story as is, or pick it up later.
Posted by nerinedorman at 12:43 PM No comments: