She's really lost it this time

Those of you who're close to me know I'm apt to leap before I look, or think, for that matter. Crazy idea number one (of surely many to follow this coming year) is to somehow write an 80 000 (that's what I'm guesstimating) novel in time to revise and submit within March for Angry Robot's open door month. (Yes, I'm an Aries, in case you're wondering.)

You can read more about Incarna here: http://paranormalwriters.blogspot.com/2010/12/adventures-in-urban-fantasy-birth-of.html

Thing is, I work in a deadline-driven environment. I work better when someone expects me to achieve the impossible. So, anyone else wanting to jump in on the madness? I'll crit yours if you crit mine (anyone mad enough to try for the Angry Robot fling?). 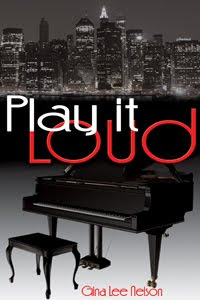 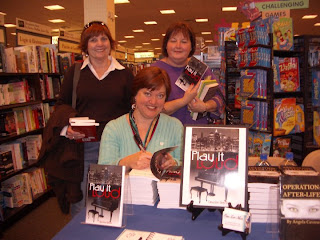 Today I welcome author Gina Lee Nelson to my world. Welcome, Gina, and many thanks for stopping by for a chat. I recently read her romance novel, Play it Loud, and enjoyed it so much I dropped her mail to say thank you.
How did you take the well-known concept of "girl meets celeb" and give it that touch of realism?

I attended acting school at the Circle in the Square Theater in New York City. In the theater district and on the Upper West Side it was common to see celebrities on the street. I also worked for a catering company that handled parties and dinners in Lincoln Center and the Museum of Modern Art, plus other well-known clubs and theaters. Though we didn't exactly exchange words, I'll never forget seeing celebrities like John Malkovich and Val Kilmer up close and personal. My experiences in Manhattan definitely removed some of the celebrity mystique.

One Christmas I was invited to a party at the home of one of my fellow acting students. Turned out she was the daughter of a famous Broadway composer and lyricist. Her home was a two-story apartment on the 80th floor of a historic building on Central Park West. I walked in and found not only her famous composer father, her well-known actress mother, but their famous friends, Lauren Bacall and her children.

You write with great passion about music. Do you play at all? Do you have favourite music you listen to while you write?

I don't play, I sing. Trained in musical theatre, I currently teach choir and drama. In my personal life, I often sing in church. Music definitely draws me closer to God.

If music is on when I'm writing, it's very, very low and usually instrumental. I'm so auditory, music can be distracting. If I'm editing or formatting, I might listen to Zydeco, Jack Johnson, Keith Urban--you name it. I'm a fan of music all across the FM dial.

Tell us about Evan Price. Are there any real musicians who inspired him?

Absolutely. I was a huge Josh Groban fan when I began writing this story. My hero is from Georgia, not California, but Josh was the original inspiration.

Let's see...I often write at the desk next to the television in the middle of my living room, but only when all is quiet. Occasionally I write on my laptop in bed before I go to sleep. I don't recommend either location, but I currently live in a small space.

Are there any works in progress you'd care to share the skinny on?

I'm trying my hand at a light, Southern mystery series set in Texas. It's based on a short story I published with The Wild Rose Press a few years ago.

Tell us about Play it Loud.

An ambitious reporter stumbles upon the story of her career when she rescues a pop star from the path of an oncoming subway train. Little does she suspect that revealing his painful secrets will challenge her need to succeed at all costs.
Claire Ashton-Howard strikes out on her own to prove to herself, her Upper East Side family, and Downtown Magazine she has what it takes to make it as a journalist. Unfortunately, immersing herself in Evan Price’s life may force her to question her motives, confront her controlling family, and open her heart.

Two years ago, a devastating motorcycle accident not only stripped Evan Price of his pop star status, but cost him his friends and his incredible singing voice as well. Now he’s ready to pursue a comeback as a writer and producer. First he must overcome the demons in his past, and then convince Vista Records he’s more than a has-been. In spite of his misgivings, he allows Claire to infiltrate his defenses only to discover she may be as self-centered as the music world around him.

What are the three books you'll always have on your shelf and why.

Touch not the Cat by Mary Stewart was written in the 1960s, but it pushes all my buttons. It's a delightful mystery within a mystery that doesn't reveal the identity of the heroine's telepathic lover until almost the very end.

To the Hilt by Dick Francis. Probably my favorite mystery writer, Francis writes phenomenal, spare, yet illuminating, narrative. The protagonist in this mystery is an artist who leaves his bare existence in the Scottish Highlands to save his family and reconcile with his wife, on his own terms. Yum.

Wicked Game by Jerri-Smith Ready. Also a first-person narrative, this one's about a young woman who turns from life as a grifter to marketing a radio station overflowing with vampire DJs. Each DJ spins records from his or her own era, but the emphasis is on the rock music of the 1990s. Deliciously frothy, and very sexy.
Okay, I'm shocked. I chose not only three first-person narratives, but three mysteries as well. I'm obviously going through a phase!

Excerpt:
Claire’s instincts as a performer were right on, courageous fire and simmering sensuality. He remembered her courage from the subway and her sensuality from the audition. Now as she played, his passion ignited, and a desire stirred to take her in his arms. The red highlights aglow in her gorgeous hair and the strength of her ivory hands captivated him. But it was her expression of ardent longing, innocent and untried, that drew him in and urged him to follow as if she played the piper.
He almost forgot to open his mouth and sing when the time came. Braff thought his voice no longer had value, would no longer sell records. In spite of the music exec’s cutting words, Evan sang anyway. For the love of it, for the need to succeed, to prove to himself and to all of them that he could.
When the last note faded, the room remained silent. All at once, the musicians erupted in excited chatter. He stole a look at Claire. Good, lord. Her skin was pale, smooth and perfect. Her eyes were a warm hazel-green with the same russet lashes as that magnificent hair. She wasn’t beautiful–she was bewitching, striking and different, qualities he’d been too angry to appreciate in his hallway. He met her stunned expression with a gentle smile of encouragement and flat out pleasure. They would make the perfect team. His breath stopped for a moment when her gaze softened with what? Admiration? For what? He shook himself.
“Beautiful,” he murmured for her ears alone. He smiled at the others. “Great job. Now get out.” Evan pointed at Claire. “Not you. You and I need to talk.”
* * * *
NEWS from Nerine... wearing her editor's hat...

I'm not quite sure when it happened, but I became a bit of a Scrooge some time over the past decade, probably 'round the time I came out of the broom closet and admitted that I'm not a Christian. I celebrate the Wheel of the Year with the pagans, tho' I describe myself more as a self-styled mystic with iconclastic tendencies. I am a philosopher, a magician and an author, which sort of suggests that I spend a whole lot of time thinking about stuff then writing about it, with the intention that my words eventually go out there and create change. Even in romance writing, which is pure "for the fun of it", I love showing characters who experience some sort of personal transformation. And that is pure magic, in my opinion.

But, I'm also in the media industry, and that's the thing. Over the past decade that I've been immersed in assorted advertising-related print media scenarios, I've grown to despise anything that is attached to a "reason for the season", pink-and-red Valentine's hearts or gifts for Mom.

I've reached the point in my life where I can and will have a panic attack if you make me walk through a shopping mall at year-end, at 11am on a Saturday. Tinsel fills me with a gnawing sense of impending doom. Christmas carols cause me to hyperventilate and look for the nearest exit. Don't even show me a fat beareded man in a red suit. I'll run screaming. Ho. Ho. Ho.

Why? Because any commercial holiday that requires me to a) buy stuff, b) buy stuff and c) buy stuff, uses clever advertising to induce guilt and generally involves extended meals with family I cannot stand, is just... Well, I don't buy it anymore. I've opted out. Part of my work involves selling lies. You can't honestly expect me to buy my own patter, do you?

And, you're more than welcome to point fingers at me, because I can't and won't have kids. I'd probably be singing a completely different tune if I had spawned a sproglet or two. But I've also got a funny feeling if I'd had sprogs, I'd probably be the horrible, nasty kind of mother who doesn't put up a Xmas tree or buy gifts. And my offspring would live deprived lives and probably end up being the kind of parents who overcompensate for my evil a generation later by stuffing their offspring full of Xmas cheer.

What I'll be celebrating this year is UnXmas. Essentially this boils down to taking advantage of the general buzz of everyone else being on leave so we can partake in that old South African custom of "kuier" (Afrikaans for "visit" that implies sitting around and talking about sh1t while drinking).

Depending on whether my car is functioning, I may drive 244km up the N2 to visit my family, but I'm not going to lose sleep over the missed gammon lunch. I stopped eating pork about half a decade ago, in any case. And besides, I loathe my siblings. I'd rather visit my folks when the others aren't there.

Call me anti-social if you will, but I'd rather not fall into that breathless rush of looking for marzipan at 4.30pm on Christmas Eve or eating myself into a stupor. You'll find me rather chilling on my balcony, sipping a G&T, and enjoying the view. Deadlines aside, I have enough to stress about during the rest of the year. And damn, that gin tastes fine with lemon when it's 28ºC outside and everyone else is comatose after too much braaivleis.
* * * *
Writing as Therése von Willegen, I released my first erotic romance novel, Tainted Love, on December 9. While romance may not be everyone's "thing", do go take a look. I had loads of fun researching and writing the story. It's quite a departure from my usual fare, but it's a great story with some memorable characters. Besides, who hasn't wondered what it must be like baring all?