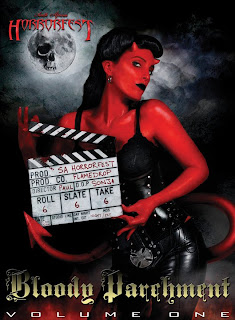 It's been a little quiet around my blogging for the past few days and there's a very good reason for it. I'm on leave from work in the salt mines and I've been busy catching up with my editing obligations, as well as just taking time out to sit in the sun, drink tea and read. For those of you who know me in person, you'll understand why I need to do this. To give you some indication of my state of mind: I slept the whole first day of leave, I was that tired.
But stuff's been happening, okay? During the past week or so I've written a blog serial that will release in weekly installments for the next eight weeks. It's a bit of a monster mash-up but I've had good responses so far from my beta readers, who've been invaluable with regard to the advice they've given me to help fine-tune the writing. Many thanks to Carrie, as well as the ladies at ERA. I'll be releasing it every Tuesday, from this blog, so keep your eyes open.
Last week also saw the release of the Bloody Parchment anthology, which was a project that kept me busy between all the deadlines and madness for the past year. I'm crazy enough to have announced that the entries for volume two are now open. Get the download link and details for the competition here. The winner receives a full batch of edits on a novella- or novel-length work.
Other than that, I've been reading submissions, working on beta critique and catching up on Lyrical Press editing obligations. It's been absolute bliss staying at home, in my PJs mostly. This ends on Thursday but the illusion can continue until then, I reckon. Then it's back to early morning starts and doing my usual two-hour commute every day. I'll say this much, that I've knuckled under and started work in Khepera in Shadow, which is book three of my Khepera series. So far, books one and two, are available. In order they are Khepera Rising and Khepera Redeemed.
For those of you who have a fondness for cocky, foul-mouthed anti-heroes, you may want to give Jamie a try. He's a bad-ass black magician and bookshop owner in Cape Town, South Africa, and his world almost literally becomes hell on earth when stuff goes wrong in his life. I can guarantee you'll be cheering him on though at times you'd dearly love to slap him.
Posted by nerinedorman at 11:12 PM