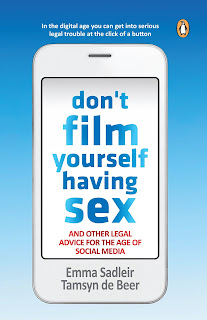 As the title of this book suggests, it’s full of very useful advice, and as authors Emma Sadleir and Tamsyn de Beer say, please never, ever, ever film yourself having sex. Just don’t do it. Don’t even let your partner tempt you as a way to spice up your kinky time.

To give a little background, Sadleir and De Beer are attorneys and their areas of expertise cover print and electronic media law – so basically, they really know their ins and outs with regard to the use of the internet and social media, and they’ve written this book to give Joe Public the low-down on how to survive the many pitfalls presented by the internet.

While many of us would hesitate to say or do nasty things to people to their face, social media and our many electronic devices, be they smartphones, tablets or computers, offer us the illusion of immunity.

Ask yourself this: how many times have you jumped on a self-righteous bandwagon when there’s been some sort of social justice issue becoming the flavour of the week? Have you stopped and thought about whether anything you’ve said or posted could possibly create serious backlash? You might lose your job or, even worse, tarnish your reputation. Once an event has gone viral on social media, it sticks. There’s no way to truly dislodge it, and its effects can ripple out and affect you for years afterwards.

Essentially, Sadleir and De Beer talk about how we communicate, and how our methods have changed so rapidly over the past few years. (They’ll even share some of those pesky abbreviations in a way that isn’t tl;dr.) Much of what they discuss is pretty darn serious, but they keep the tone of their cautionary tales light, and set out the sharing of the information in an often funny, tongue-in-cheek way that often had me laughing out loud. This is the sort of book you can buy your aged father or get your teenage daughter to read. And, in fact, I suggest you do. And omfg, please don’t ever joke on Twitter about planting a bomb at an airport. Just don’t go there.
Posted by nerinedorman at 10:00 AM