The first time I met Ramsey Dukes, it was over breakfast at the now-defunct Tibetan Tea Shop in Simon's Town. A friend had put me onto him, as someone I should meet and talk to, and as they say, the rest is history. He is a thinker of rare wit and deep insight, and it is through this slim little volume SSOTBME: Revised, an Essay on Magic, that I've rediscovered my delight in the Western magical system. 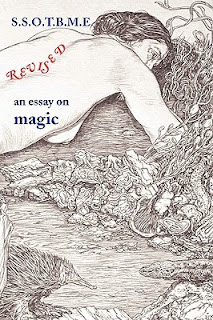 Dukes outlines a system of approaching our experience of our world into four directions: Scientific, Religious, Magical and Artistic. Each is a valid way of evaluating and making decisions. Each has their own purpose, and in fact, he goes on to show how each individual will at different times employ that sort of thinking.

Chiefly, he deals with magic, explaining it as an approach that is unafraid to be selective in which criteria one adopts when it comes to problem solving – IOW, the stories that we tell ourselves to explain a set of circumstances. According to Dukes, magic embraces both truth and falsehood, as well as illusion, knowingly. He suggests that it's not so much how one arrives at a solution, but the point that one's actions produces tangible results, even though they might not be considered logical.

A magician, according to Dukes, is aware of his surroundings, of the patterns, and is adept in manipulating them according to a particular expression of his will. [My explanation, using the Parking Fairies is – if asking the Parking Fairies to help you find a spot near the mall entrance on a busy Saturday appears to help you chill the fuck out and find that parking spot, while giving you the illusion that the task was attained easier, then why the hell not]

Mostly, Dukes explains how magic is a way to engender wholeness. There's a certain degree of playfulness to it as well, if you ask me. And there's the fact that as a magician you become more aware of the interconnectedness of things around you, and better able to manipulate outcome because of the changes you have wrought to your own responses.

Imagination is a powerful tool, and we're apt to be dismissive of it, but often this "set dressing" as it were, adds meaning to how we approach our daily challenges. Also, what Dukes points out is that you cannot use the same criteria to evaluate magic as you would for, say, religion or science. To do so is absurd (and a waste of time). And similar to art, magic is about creating and manipulating meaning around you. And to be unafraid to play with subjective viewpoints – and to do so fluidly and not locked down by dogma.

He underscores that Magic, Art, Science and Religion should not be at war with each other, but that those forms of approaching our daily lives are often intertwined and various expressions thereof have prominence at different situations. Magic is merely a way to maintain a perception that is different from the norm, it is about creating powerful metaphors that you can use to solve problems or create change, and embraces both light and dark aspects of Self, so is therefore beyond morality. (Which is probably why religious folks hate it so much.) Magic is what it is, it's how we approach our personal wholeness that matters to us, as individuals, and exploring the unknown. (So no dogma, as such.)

SSOTBME came at a good time for me, when I'd hit a stage in my life where I was wondering what the point of it all is in terms of maintaining an interest in esoteric matters. Needless to say, Dukes has offered a rather valuable way of looking at my own work. If you've yet to discover his writings, and this seems like the sort of thing that interests you, I can't recommend him enough. He also maintains a YouTube channel that might be worthwhile checking out.
Posted by nerinedorman at 5:01 AM