Cuddle Me, Kill Me by Richard Peirce

I remember my first encounter with lions like it was yesterday. I was about eight or nine, and my parents took me on a trip upcountry so we could visit family in Pretoria. One of the attractions we saw along the way was a lion park near Joburg. But perhaps the biggest appeal to the experience was that I got to feed the lion cubs afterwards, and had my photo taken with them. We were told that the cubs were orphaned, and that they were being bred for “conservation purposes”. Little did I know back then that in all likelihood, these cubs were never intended to be released in the wild but were almost certainly destined for the canned lion hunting industry. We were being fed one of the most common lies spewed by unethical operators. 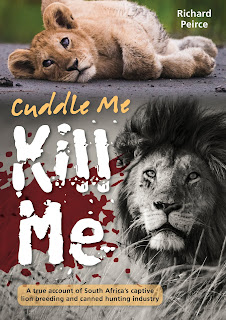 Cuddle Me, Kill Me by Richard Peirce picks up where films like Blood Lions did much to blow the lid off of one of South Africa’s greatest shames – the large-scale breeding of predators for commercial purposes.

This is not an easy book to read, because it brings me face to face with the ethics of captive breeding of lions and other large predators. I ask myself, is this any different than our factory farming of livestock for consumption? What makes it right for us to enjoy bacon when we disparage lion farming? It makes me examine the human relationship with other sentients on this planet, and I don’t like what I see.

The crux of the matter, as put forward by Peirce, is that captive breeding of lions has absolutely no conservation value whatsoever. Lion farms do not create more jobs or boost the economy significantly, no matter what the Department of Environmental Affairs says; breeding farm workers are more often than not foreigners who pay to volunteer raising cubs that are in most instances removed from their mothers within days of being born. They think they're helping, but in actual fact, they're being exploited, just like the gullible public who want that cute picture posing with a sweet, adorable lion cub (ever wonder what happens to Simba when he's not so cute and cuddly anymore?). And it gets ugly when you think about how these beautiful creatures are inbred, raised in unsuitable, unsanitary cages only to be released in enclosures for hunters to come make a kill where the lion stands absolutely no chance to escape. Where some rich, clueless foreigner pays thousands of dollars just so he can get his kicks shooting an animal that never stood a fighting chance.

Peirce highlights (and here I agree with him totally) that this need to collect trophies is an outdated, outmoded concept that dates back to colonial attitudes, that does not take into consideration a more holistic African environmentalist approach where we aim to live in harmony with nature instead of treating it as a commodity solely for our commercial benefit. He shows us that our government is quite clearly out of touch with a global movement towards environmentalism, and that it panders to Asian markets in allowing the trade in lion parts now that tigers have been all but decimated.

Okay, this was a thoroughly depressing book, but it was so, so necessary for me to read it. It hurt like all hell, if I’m honest. I understand that the only way we will change the situation for the thousands of noble beasts that are being treated no better than battery chickens is if we, as citizens, do our bit to halt the demand for lion tourism activities such as “walking with lions” and cub petting, for starters. Equally, the demand for animal products in Asia should be addressed – though that is beyond the scope of this review to address.

Hats off to Peirce for the important work that he’s done with this book that has been years in the making. It’s difficult to remain objective when it comes to such a hot-button topic, but he does a good job to try give all players the benefit of the doubt, though in all good conscience, I fall on the side of those who are firmly against trophy hunting of large predators. And I sure as hell cannot condone lion farming. Not after what I’ve learnt.

What can you do? Peirce supplies a handy appendix at the end of this book of organisations and initiatives that are working *for* lions in an ethical way. I reckon I need to look into supporting the ones closest to me. As for the rest, I’ll remain vocal about my opinions about those who who turn lions into a commodity. I can probably go on for a bit, but I’ll stop here by saying is that if you care about the fate of the king of beasts, then go read this book. Talk it up. Support the people and organisations who are working towards actual conservation.
Posted by nerinedorman at 12:00 PM