It can be argued that mages in a contemporary setting has been done to death, but there's something about Shawna Reppert's Ravensblood that drew me in. The story has a sort of Harry Potteresque feel, but imagines a world where magic has been normalised – and what the possible impact it would have on society. 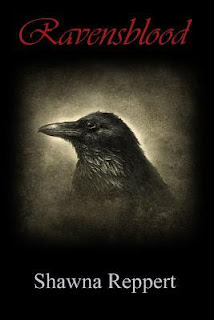 There's the division between light and dark mages, with enough grey areas between to make me happy that this story had some morally ambiguous areas. And then there's the fact that I'm a sucker for redemption arcs and broody anti-heroes of a gothic bent. Which makes this novel very much a not-so-guilty indulgence for me between other, more serious reads.

And if there wasn't a bit of Severus Snape in Corwyn Ravenscroft then I'll eat my magic mouse.

This the first in a series, so I'm glad to see there are more books to follow up, as I've grown rather attached to both Cass and Corwyn. The story thus far is quite simple – Cass lost her taste for dark magic and returned to serving the light – and more specifically the Guardians – a sort of special force to protect society, but she still has a huge stigma attached to her due to her association with the notorious Corwyn – or Raven as she calls him. Cass's partner, Zack, is an Aussie with attitude, but he's a man of honour who stands by Cass when others are quick to judge her.

Corwyn is the right-hand man of the dark mage William, who hides behind his magical wards while biding his time to bring about a new age that sees him as the great overlord.

Look, I'm not going to spoil what happens, but there's a lovely redemption arc narrative here, with the whiff of a not-quite love triangle. I like the fact that the dark and light mages are portrayed as human – not just convenient caricatures. Not all the good guys are squeaky clean and some of the bad guys are pretty decent people too – just that their outlooks on life set them at polar opposites. And I reckon that's probably what kept me reading.

While Reppert doesn't cover any fresh ground in terms of tropes, she tells a good story with heart, and motivated me to purchase book 2 in this series the moment I was done. Consider me invested and looking forward to what happens next.
Posted by nerinedorman at 12:26 AM