I picked up a copy of Runebinder by Alex R Kahler on the say-so of a friend, and I will happily agree with him that the book packs a lot of punch. Not once did Alex allow me to get too comfortable – so there was always that tension of 'oh goodness, it can't get worse, can it?' 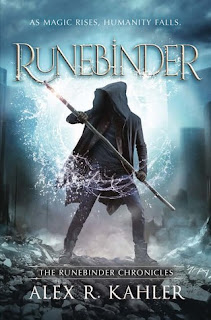 In Tenn's world, the magic came back, and there are those who are gifted with control of the different spheres of earth, air, fire and water, and there are those who're normal. And everything would have been fine in the world (or relatively so) if the ominously entitled Dark Lady hadn't risen with her minions, to destroy everything and reshape it to suit their needs, warping humans into howls, bloodlings and Kin. (So, think, basically if you're unlucky to run across Kin, you'll be turned into a mindless zombie or vampire.)

Tenn and his friends are tasked with protecting the remaining human communities from the unrelenting onslaught, and it's clear their side is losing ground rapidly. To add to Tenn's woes, his chosen sphere of water has a mind of its own, to devastating effect, which has drawn interest from exactly the kind of people he's fighting.

First off, kudos to Alex for realising a compelling setting. The divisions were a little too clear-cut light/dark for my tastes, but hey, that's me. I have a thing for morally ambiguous characters. His post-apocalyptic USA makes you realise exactly how dismal things can become should society's wheels come off. (Think The Walking Dead, but with necromancers and more.) He sets a pace that keeps characters on their feet, and lends a sense of urgency as Tenn and his companions forge ahead.

That being said, I did feel that the characters could have been been a little more fleshed out, and Tenn's head-over-heels falling for Jarrett came across incredibly fast and intense. However, with such an uncertain world in which Tenn lives, I can't blame him for giving into the attraction as rapidly as he did. Occasionally some of the transitions in sequences were jarring—the writing too fast—but this wasn't a dealbreaker. What Alex does do well is his action sequences, which kept me pretty much on the edge of my seat. Tenn spends much of his time at the start of the book crippled by self-doubt, which at times was laid on a bit thickly, but it's good to see Tenn come into his own once he realises that the only option he has is to push forward and master his powers before others master him.
Posted by nerinedorman at 11:16 AM