A Blessing of Unicorns by Elizabeth Bear

I've been meaning to get into Elizabeth Bear's writing for a while now, so when A Blessing of Unicorns popped up in my Audible suggestions, I thought why the hell not. Only in hindsight do I see it's book 2 of a sequence of stories – The Sub-Inspector Ferron Mysteries, but it didn't bother me none that I missed the first instalment, and I may well go back to pick it up when I have a moment. 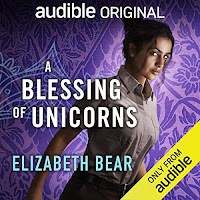 I will admit that it took a little getting used to narrator Zehra Jane Naqvi's voice, perhaps because the previous audiobook I'd listened to had been read by a man with a much deeper voice, but once I was over the initial shift, I got into Naqvi's style.

Set in the 2070s, which aren't that much different than current times, save for the deeper reliance on virtual and augmented reality than we have currently, A Blessing of Unicorns has Bangalore-based Police Sub-Inspector Ferron trying to figure out why internet-famous influencers are going missing. Not to mention figuring out why the missing women's flats are filled with small herds of artificial lifeforms in the form of multi-coloured unicorns.

Overall, this is a somewhat playful mystery that pokes sticks at society's tendency to put internet-famous influencers and their rather artificial lives on a pedestal. I enjoyed it, especially for the non-Western-centric flavour in speculating on an India of the future. And Ferron is a delight, and a pleasing change from the usual jaded, hard-bitten cops that often crop up in these sorts of stories.

Posted by nerinedorman at 2:20 AM