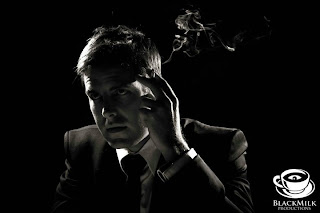 I've had the pleasure of meeting the very talented and charming Aidan Whytock a number of times. He's acted in a few of the short films my husband's worked on with the BlackMilk Productions team. Those of you who're au fait with the South African indie film industry would have seen him in a bunch of films, but notably in Sweetheart, by the Be Phat Motel film company.

Aidan's been an absolute darling and stopped by my blog for a quick Q&A. Catch him while you can, folks, damn right this lad's going places.

So, Aidan, when did you know you wanted to be an actor?

I developed a stammer when I was five years old. It made it difficult to communicate and thus I developed a fear of speaking and especially speaking under pressure. My wise dad once told me to face my fears. So when I was about 15 I decided to get a one-liner role in the school play. I practiced and practiced and I didn't mess it up! It turned out the stage was a place where my stammer wasn't in command of me. It was liberating and became a desire from then.

Who were some of your influences and what were the most influential films you watched while you were growing up?

When I saw The Last of the Mohicans Daniel Day-Lewis became one of my favourite actors. The soundtrack also blew me away and the fiddle theme-tune became an anthem of my youth. The Crow also had a profound impact and my propensity for darker content was born. Again music and imagery's fusion captivated me.

Okay, you've mentioned The Crow, which means I'm probably going to be your undying fangrrrl forever. What I want to know, is it difficult breaking into acting as a career in South Africa?

Very. There isn't a huge amount of work on offer. Theatrical space is there to be utilised but alas it isnt well supported, which makes it tricky to pay the bills. Film work is in short supply and generally the lead roles go to international actors. The supporting roles go to the seasoned SA actors and they, to their credit, have created a captive market for themselves

With that in mind, what advice do you have for aspiring actors in SA?

To get where you are now, what path have you followed so far? Tell us a little about some of the work you've undertaken.

I used to be in the corporate world, selling beer. I decided there was more to life than the bottom line and I returned to the passion place from school. After training again I joined a troupe that meets twice a week and honed my ability as a Meisner actor. With a bit of training in LA under my belt I found myself in a position being asked to perform roles I didn't think I could do. That has been the largest lesson: push myself. Because of that I had the privilege of working on the award-winning The Lovers, Safehouse and recently a short action comedy and a heavy apartheid drama, shot in LA.

Thank you for stopping by, Aidan. Dare I say break a leg?
Posted by nerinedorman at 1:07 PM