Indulge in a Dark Kiss with Liz Strange 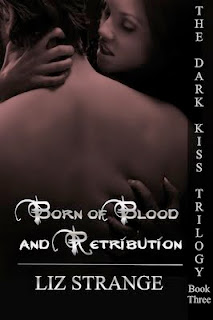 Liz Strange and I have walked a long road with her Dark Kiss trilogy and she was one of the first authors I took on when I started editing for Lyrical Press. Her Rachel and Giovanni are memorable and I've gotten to know them quite well over the course of three novels. This week Liz celebrates the release of the third in the series, Born of Blood and Retribution, which should give vampire fans a roller coaster ride.
When asked about some of her favourites in contemporary media, Liz says, "I love Jean-Claude in Laurell K Hamilton's books and Henry Fitzroy in Tanya Huff's series. They are both sexy and strong, but have an edge. They have embraced their monstrous existence."
It's fascinating watching how characters grow, and I had to ask Liz about Rachel and Giovanni. To this she adds, "Well Rachel has grown from a confused, somewhat insecure young woman to a powerful, well-connected immortal. She's faced the grimmest of circumstances and come back the better for it. I wouldn't underestimate what she could be capable of.
"Oh, Giovanni. He did get a bum deal, but what an amazing story! By book three he is mostly recovered from his ordeal, and firmly back in the relationship he was destined for. He will, however, have some lasting effects from what happened to him, essentially the same Giovanni, but perhaps a bit more guarded and appreciative of what he has and who he is."
Themes of abusive relationships and revenge are prevalent in book three. This results in some potentially tricky situations with readers. I was curious as to how Liz brought readers back from the brink of despair.
Liz says, "I like to give the readers a sense of closure, and some sort of 'happily ever after' after the intense and often violent situations the characters find themselves in. As much as my characters ever get anyway. I think I've given them characters to fall in love with and root for, and that makes the adversity they face and overcome that much sweeter."
Of course all authors have their favourite scenes in a novel, and Liz is quite happy to share hers, as well as a bit of background that went into its creation.
She concludes, "I love the scene where Harshika takes Rachel back to ancient Egypt and lets her experience the time period for herself. I got to live vicariously through Rachel with this. It was so much fun doing the research for the scene, and letting my imagination fill in the blanks. This story really allowed me to bring my love of history, mythology and vampires together in a very satisfying way. I am a huge history nerd, and would jump at the chance to see what Rachel did."
Thank you for stopping by, Liz. And I wish you all the best of luck for the Dark Kiss trilogy and your future endeavours.
Read more about Liz's books here.
* * * *
In case you're wondering, I'm actively looking for submissions in the dark fantasy genre. And I love vampires. If you reckon you've got something I may be interested in, go read the Lyrical Press submission guidelines here, then pop me a query at nerine (at) lyricalpress.com
Posted by nerinedorman at 1:31 PM