First look at BLOOD AND FIRE 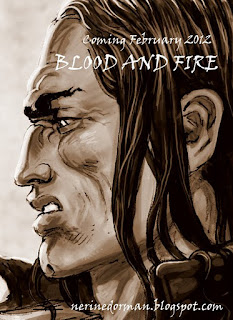 I gathered a few tangles of daimonic essence, just enough to be coiled, in case I had to strike, and pushed open the door. The barrier swung inward, grating dryly on invisible hinges. Within was a chamber, its unplastered walls revealing redbrick and mortar. The only source of light was yet one of those horrid green lights that illuminated a lidless sarcophagus, which appeared to be carved out of limestone.

Within lay a Native American man with noble features, his body bound painfully with chains in a mockery of a mummy’s bandages. Several padlocks held these bonds in place. He wasn’t a mortal. His lips were pulled back in a silent rictus snarl to reveal vicious elongated canines—which would not look out of place on a wolf.

Other collaborations by Carrie Clevenger and Nerine Dorman, Just My Blood Type
Nerine's Facebook page
Crooked Fang on Facebook
*teaser material subject to change
Posted by nerinedorman at 9:14 AM