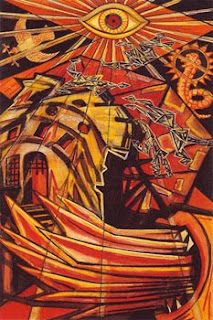 As a rule, I don’t generally do tarot readings for myself but I’m always willing to make an exception after a glass or three of wine. It’s a Friday night. The wind outside shakes the trees and rattles the windows in their frames. I should be out. I’ve gone as far as opening my cupboard to stare at my black threads, but not one garment has caught my fancy.
Why go out and get pissed in the company of people who annoy the living shit out of me when I can get blind drunk at home without all the predictable aggravation? Of course this sudden reticence on my part is out of character, but for fuck’s sake, I’m allowed to indulge in the occasional fit of pique.
The others will still be there next week. They’re always there at The Event Horizon, their fat-rolls stuffed into too-tight corsets or PVC pants as they blink drunkenly into the narcotic strobe light when the DJ spins Marilyn Manson, VNV Nation or Rob Zombie.
Tonight is different. This sense of the sacred aches in my bones like nicotine withdrawal. Or perhaps not the sense of the sacred, but rather the realization of the futility of routine, of breathing, of waking each day and going through the motions, a mechanical animal that sweats, eats, shits and pisses its way through its miserable existence.
My chest is tight and my breath wheezes past my lips. I reach for my packet of smokes but my fingers twitch away. The ember of the last cigarette still smolders in the heavy glass ashtray to my left. Instead my fingers tap a complex rhythm on the dark wood of the table top. They have a life of their own tonight, the most animated parts of my body, which is frozen, hunched over the deck of cards resting on a square of midnight velvet.
The red wine has gone bitter on my tongue, my throat thick from smoking too much. Nevertheless, I gulp more Pinot Noir and grimace at the taste. I’m almost ready for that second bottle and the wine hasn’t touched sides. The world is still in too-sharp focus while the liquid churns in my belly.
The cards are cool to the touch and I shuffle them thoroughly while I concentrate on my breathing, on clearing my mind of all the dross that’s been nagging me this past week and, especially expunging the clutching nightmares that have shaken me from sleep almost every night.
Slap, slap, slap.
Three cards in a row lie face down on the fabric. I clear my throat, the sound resonant in the echoing domain of my lounge. I flip the one in the center over to reveal The Fool, resplendent in his green jacket with a tiger gnawing at his leg. It’s too early to tell exactly how he’s dignified. I hate the way he grins at me, like he beholds some secret of the universe; knowing I’m still going to discover it.
The next card, on the left, reveals the Nine of Swords. Cruelty. Blood drips from the blades. I’ve never liked this card. I try figure out how The Fool relates to Cruelty and growing unease stabs at me. Perhaps I’m rushing off into a direction I don’t want to take. I might face the cruelty of those around me. I’m taking a definite plunge. It could be inspired. It could be folly. But there are people sharpening their knives, slanderous tongues and wicked thoughts twisted against me.
Yet I don’t know. It’s always easier to read the cards for someone else, where I can cut loose and babble incoherently, and take cues from my client. Then I can play with words in such a way that makes it appear that the cards impart wisdom, advice for the future, when all I’m doing is giving them the meaning someone else wants to hear.
My fingers tremble when I turn over the last card. The Tower. Destruction of all illusions, of the entire world burned up by the wrath of Shiva’s eye, of the earth opening to belch forth flame to devour saint and sinner alike.
With a growl I sweep the cards together then shuffle them. They hiss against each other for what feels like forever but this time, once I clasp a neat deck, I fan the cards out across the velvet.
Eyes closed, I trail a finger across them, from left to right and back again until one seems like a better option than the others.
I flip the card over and my pulse stutters. The Tower’s dirty orange-and-black tones scream at me. A hiss escapes my lips as I repeat the process. Shuffle, cut the deck this time, shuffle some more. Make three piles of cards which I randomly stack together. Shuffle. Pick another card. Look at it.
The Tower. A strangled sound wrenches itself from me. This would be funny if it weren’t for the fact that The Tower’s showed up in five of the readings I’ve done for paying clients this past week.
The shatter of breaking glass from the kitchen has me lurch to my feet accompanied by a tortured rasp from my chair’s legs. The black-painted walls close in on me and I catch a glimpse of my pallid features in the gilt-framed mirror hanging over the fireplace. My mouth opens and shuts without sound for a heartbeat or two before my legs obey my need to investigate the nature of the disaster that awaits.
Wine pools among shards on the slate of my kitchen floor. Pyewacket washes her white mittens on the counter, her eyes cold emeralds as she briefly pauses in her ablutions so she can cast a glance in my direction.
Posted by nerinedorman at 9:19 PM