When the Sea is Rising Red release 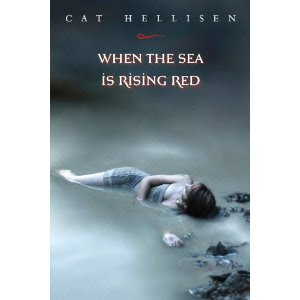 Today I welcome Cat Hellisen to my world. Her young adult fantasy novel, When the Sea is Rising Red, releases tomorrow and she’s graciously stopped by my blog today to chat about her bats…erm vampires.
Racial and class divisions are rife in your setting. Do you think your upbringing during apartheid-era South Africa had anything to do with this?
Oh, very much so. I remember when were called to a high school assembly and it was explained to us that we were now a model-C school and as from next year there would be black students in our classes. It's insane and horrifying now to think back to that, but privileged children are brought up blind to the hideous truths behind their status. From birth, the culture around you encourages your belief in your superiority thanks to the colour of your skin or your economic class: the haha so funny racist jokes, people putting on black accents when they wanted to show how stupid someone was, the NET BLANKE signs on trains and buses.
With Felicita, the main character in When the Sea is Rising Red, I wanted to show a girl who grew up on that insidious diet of racial (and in this case, magical) superiority and what happens when she's forced to confront those beliefs she has been fed. I also didn't want her to change too easily or too much, because I find that kind of super-fast about-face rather unrealistic after a life time of indoctrination, but to show that she's questioning what she has always believed.
Writing vampires into fiction can cause quite a bit of eye-rolling in some quarters. How did you approach them as a race in When the Sea is Rising Red?
Mention vampires, especially for the YA genre, and outcome the sparkly jokes. I actually applaud Meyer – she took something and made it her own. It might not be to everyone's taste, but writing what she wanted to write has certainly not harmed her (or her bank balance, I might add). I kinda like that she's the poster child for write what you want to read.
But to the actual question, I didn't really approach them. The Hobverse books started as a single scene: A boy watching a vampire burned to death at a stake. Everything that I've written about them since grew from that single concept of watching a "monster" sob for its mother as it waited to die.
Bats are considered second-class citizens in your milieu. What makes then different from the "ordinary" folk?
Without spoiling any future Hobverse books that may come along – in Felicita's world, vampires are not immortal shape-shifters feeding on the life-blood of fainting damsels, they are the lowest of the low.
They are marginalised for looking different, their insularity, their eating habits. They feed on blood – and I took that as another way to approach racism. Food is a huge cultural dividing line. Add to it the concept of cannibalism, and you have a reason for the ruling classes to consider the bats filth.
Bats and magic. What is the connection here?
I'm really going to have to dance around spoilerific stuff here. The bats are magical but they cannot use magic – another reason they're considered less than human. The magical ruling classes use a drug called scriven to access latent powers but the vampires are considered creatures that have been formed because of the fall-out from a magical war.
Are there any contemporary authors you know of who're approaching vampires with a whiff of fresh air? Or do you despair for the genre?
I don't despair for the genre at all – someone is always going to come along and play with the tropes and tweak things – and like it or not, Meyer did just that. *grin* There is so much variety in the scope of the vampire character – whether you're looking for Bram Stoker monsters or Anne Rice fangster wangsters, you've got everything. And everything in-between. We're fascinated by them – there's the appeal of the soulless immortal who sees humanity as food while still missing their own human-ness, I think that's a fun concept to play with. As for me, I'd love to see more non-Eurocentric vampire mythology get pulled into the chaos.
YA fiction is more than tortured teens and love triangles. Tell us of three YA authors who're mavericks in their own right.
My favourite book of last year was YA - Chime, by Franny Billingsley. I love how she played with mythology and witchcraft and social standing in an alternate Victorian England.
Hannah Moskowitz is best known for contemporary but I know she's working on books that could easily fall under magical realism. The way she writes relationships between brother/families is so twisted and achey it makes my chest hurt.
And I just finished The Marbury Lens by Andrew Smith that was delightfully fucked up. Parallel words or insanity or both. I love that kind of claustrophobic confusion.
How do you approach the YA secondary world genre and make it shine?
I play with it. I read widely. I force myself to not take the easy options. Well, that's the theory anyway.
Five lashes:
Favourite sin?
Gluttony.
Whose lovechild would you bear?
Eh. I think they should bear my love-child.
The one song you'd put on repeat when no one can hear you sing?
Oh god. *hides* The Stars – Patrick Wolf.
Your dream holiday escape?
I'd love to spend a few months in India.
What do you bake when it's payday?
CUPCAKES
Follow Cat on Twitter @hellioncat
Order your copy of When the Sea is Rising Red.
Hardcover
Kindle edition
* Special note: Cape Town readers can order When the Sea is Rising Red directly from the Book Lounge now (they're getting stock in just for us, since we asked) already as the major chain stores will only be getting in stock in May.
Posted by nerinedorman at 8:35 PM

Labels: Cat Hellisen, fantasy, when the sea is rising red, YA