Six of the Best with David Griffith #books

Today I welcome one of my fellow Bestiarum Vocabulum authors, David Griffith. And sticking with the theme of the anthology, we're talking about creatures. So, David, what's your story in the anthology called and what seeded the idea for you?

My story falls under I Is For Imp, titled Ma’s Good Boys. It features an imp named Beazo, a mischievous character I had created in the past, but never knew what to do with him. In my historical research on folklore and religion on the topic of imps, as typically found in hidden in stone carvings in European cathedrals and such, I got the sense they aren’t so much evil as they are just head strong pains in the ass. And that’s precisely what Beazo needed to be. 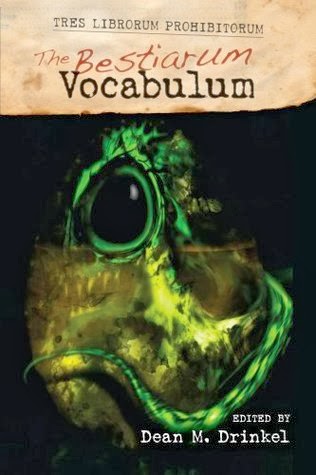 The next big question was what to do with this imp. Sitting in my loft staring at my bookcase, I glimpsed a book title containing “peripheral” and the opening line of the story was suddenly born: "In the periphery of his sight he caught something he knew was wrong.”

That person needed to be someone mundane and a step above stupid, a kind of a regular Joe living in the US state of New Jersey not far from the Jersey Shore and New York City. He needed to love his dearly departed Ma more than any other son could possibly ever love his own mother – he owned that title in his mind. And he needed to come from an Italian Catholic family that emigrated from Italy a century ago to tie the religious history elements and traditions into the story and clash with the gross absurdism that ensued. And, keeping family tradition alive and strong, he tended to his late mother’s beautiful garden filled with tomatoes, peppers and other magnificent produce used for home cooking.

So there were my two completely separate ideas that needed to somehow cross paths – stolen form Stephen King’s writer’s toolbox – and turn them into an ultimate showdown of man versus beast. Albeit, filled with dopey, if not comical, and horrific moments.

What got you writing in the first place? What excites you about stories?

I started writing in high school, roughly at the age of 15. I was always an artist of some sort, generally a visual one involved in painting and photography. One day the idea of writing just clicked and I started some early story attempts. nothing great, but the motivation was there. By my junior year a creative writing course became available, which I took in a heartbeat, and joined the school literary magazine.

This continued into to college where I studied fine arts. In addition to illustration and design, I was able to make creative creative writing part of my fine arts degree. Even though I won my university’s award for Creative Writing Excellence years went by where I had done little with the discipline, focusing primarily on developing my profession as designer. In later year years of my career, as communication became the central focus of my visual design, writing became an equally important part of my job. I had since enrolled in a Masters of Fine Arts degree in Creative and Professional Writing, which I will complete this coming May.

Creating characters, living out their strange lives in fictitious representations of the real world excite me. Part of it is living vicariously through my characters getting involved in situations I would never dare do in real life, part of it is simply an escape from my own reality, something I need at times to maintain my sanity. Really no different than reading another author’s story.

Ultimately, as I mentioned earlier, I’ve always considered myself an artist for as long as I have been able to speak and draw circles with crayons. I love to create and invite others into these worlds that stem from my brain. I love to affect emotion, whether the audience laughs, cries, feels fear, gratitude, excitement, anger, sadness, or greatness. That’s hat excites me. Just as long as their responses are not indifferent, that’s when I know the work has failed and must be revisited.

Have you got any real-life stories involving animals that scared you?

A few times in my childhood I have been attacked by dogs. Fortunately, no major physical injuries, though I was bitten hard. Threatened almost daily by a neighborhood dog while delivering newspapers, to the point I hightailed it away from the neighbor’s house on my bike as fast as I could go each day. It sucked. To this day I carry a permanent distrust of dogs. Nowadays, lawsuits would fly and those dogs that attacked me would have been euthanized. Back then it was the kid’s fault for getting too close to a nasty aggressive dog, never mind that the dogs could outrun a kid and knock them down with minimal effort.

As for all other animals – nothing scares me. I will approach reptiles, cats of all sizes and shapes, whatever – in terms of protecting others around me. Not to harm them, but to keep them at bay, and fight back if need be. Though I’d much prefer to befriend a wild animal.

Have you got any favourite animals stories?

I recently read an odd novella (or short story, ho knows these days) by George Saunders called Fox 8. It was an environmentalist sort of parable whose protagonist Fox #8 of his pack, managed to learn English by sitting outside a bedroom window at night and listen to parents reading stories to their child. The foxes' woodlands were being encroached upon my a mall developer. This innocent animal decided that the humans must be friendly and would welcome their presence in the mall. Things didn’t turn out so well for the fox pack sadly, and Fox 8, a lone survivor of his pack, managed to find a new pack to live with deeper in the woods.

I liked the story for its metaphoric representation of how the industrialized human world is corrupting the rest of the natural world. But I also appreciated the writing style, written entirely from Fox 8’s perspective, using odd spellings, misused words that eventually make sense based on context, and his naive perspective of the atrocities he witnesses, like his buddy being beaten to death for fun by some cruel construction workers.

Both an innovative and a sad story.

Do you have pets? Do they have any quirks?

Yes, two beagles and two American domestic short hair cats – all rescues. The beagles are kind of crazy, I’ll leave it at that. My wife is responsible for the dogs. Our older gray tabby cat is polydactyl: she has six fingers on each front paw, and five toes on each rear paw. She looks like she’s wearing boxing gloves. Very sweet cat, probably my favorite of the pets. The other cat is an outright panther, even though the term isn’t really applied to small cats. He gets into trouble a lot, but friendly with all guests.

And, as a taste, here's an excerpt from Ma's Good Boys.

It was the last thing he expected to see on earth, on this particularly warm spring day in Ma’s old garden, grooming the heirloom tomato and pepper plants whose seeds were passed down for generations by long forgotten ancestors from Newark. Something that George D. Giovanni would have to research before the sun went down, before he landed in the overstuffed recliner for the game. A devilish looking thing with a cow’s head – sort of – his mind wandered and obsessed over what it could possibly be.
A Jersey Devil? Nah, those things aren’t real. There was that story Joan from down the street heard about another neighbor’s cousin who tried to breed a raccoon with a bobcat out behind his garage last summer. Landed the idiot in the hospital, not sure any babies were born though; but this could’ve been one of ‘em. Anything’s possible, he surmised.
After another five minutes of studying the slight movements and shadows in the rose bushes he picked himself up from the soil and traipsed over to the plants to see what might be staring back at him. Hissing broke the stillness of the investigative moment, which was a highlight of his day, his week, really.