The Children of Húrin by JRR Tolkien #review 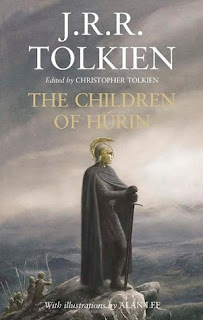 There’s a reason why I keep going back to Tolkien when I end up discussing the fantasy genre or even just how to approach the creation of epic worlds. Not to say that Tolkien was the first (because he had precursors who’re rarely, if ever mentioned), but he was most definitely the first in the genre to gain legendary status (and now has JK Rowling snapping on his heels).

Though by contemporary standards, I argue that Tolkien is not for everyone – his style is rather dry, patriarchal even – and it’s clear that this is a man who was obsessed with world-building rather than characterisation. While The Hobbit and The Lord of the Rings appear to be perennial favourites with legions of new readers each generation, Tolkien’s other works are perhaps left for the die-hard fans.

The Silmarillion is a prime example. I butted heads with it during my teens when I’d just finished my first immersion into The Lord of the Rings. I hated it. Didn’t finish it. I went back to it years later, and was absolutely blown away – not by the writing so much – but by the sheer mass of imagination. The scary thing was realising that the events that transpired in The Hobbit and The Lord of the Rings were only a thin sliver of Tolkien’s entire creation, now that was astounding.

And I found myself wishing that he had gone on to write more, because what we’re left with is but a skeleton.

It’s taken me years to read The Children of Húrin. Not because I didn’t want to, but because I knew it wouldn’t be an easy path to tread. Tolkien makes you work for it – the language usage is more akin to sitting at the fireside listening to an old storyteller recount a saga than the immersiveness of current authors such as Mark Lawrence, George RR Martin or Robin Hobb.

Having recently completed a university course on Greek mythology, I can draw parallels between that and how Tolkien approached The Children of Húrin. This is not a comfortable story. The heroes are tragic, flawed. Túrin’s hubris results in his inevitable downfall, and his victory against Glaurung is pyrrhic. The dragon itself is but a dark mirror, reflecting a twisted truth that paralyses heroes. Ophelia-like, Niënor is flotsam, cast adrift in a dark tide; though her love is pure, it is misdirected. I saw the greater tragedy approach from a distance, and could do little more than wait for the ultimate wrapping up of cruelties.

There is little that is noble about any of the characters in this story. Even the elves are cast in such a way to show that they too suffer through their excessive pride – something that the dread Morgoth doesn't hesitate to exploit. The antagonist is but the catalyst around which the others trip and fall, however for those who have distance from the situation, it is easy to make a judgment call.

If you’re a die-hard Tolkien fan, like me, and you’re yet to read The Children of Húrin, I’ll fully recommend it. It’s not quite as heavy going as The Silmarillion, and it’s going to fill in a good few gaps in your fantasy geekdom. As a template of epic tragedy, this one’s got it all. At time of writing (a week since completing my read-through), I’m still smarting and bruised. And feeling as dissatisfied and annoyed as I was at the end of Dragon Age: Inquisition. And I’ll read this one again. And again. Because: elves, dragons, beautiful worlds, sadness and tragedy.

PS, if you’re emotionally correct and easily upset by bad stuff that happens to good people, go read about unicorns pooping rainbows. This book will make you very, very angry and you’ll probably ask for it to be banned from your library.

Posted by nerinedorman at 11:17 AM