Pirate Captain sets out on a mission to defeat his rivals Black Bellamy and Cutlass Liz for the Pirate of the year Award. The quest takes Captain and his crew from the shores of Blood Island to the foggy streets of Victorian London. 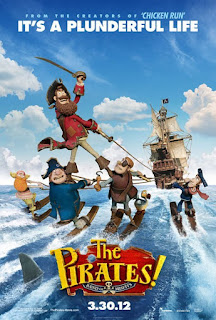 It's almost a guarantee that Aardman Animations productions will find a way into my heart, and The Pirates! Band of Misfits (2012) is no exception. Okay, they pretty much sold it to me when I saw that Martin Freeman and David Tennant featured prominently in this full-length animated movie that was as charming as Wallace & Gromit and Chicken Run.

The humour is absurd, and firmly tongue in cheek, as The Pirate Captain (Hugh Grant) goes to extraordinary lengths to win Pirate of the Year among his peers. Assisted by The Pirate with a Scarf (Martin Freeman) and Charles Darwin (David Tennant), this party of misfits goes against the evil Queen Victoria (Imelda Staunton), who has nefarious plans on the menu for poor Polly the dodo.

Typically Aardman, this film works on two levels – it will please your ankle-biters while still offering nuance and depth for us oldies. The underlying theme is that of friendship through thick and thin, but it's never heavy-handed, and our pirate captain goes through all the stages of a satisfying hero's journey. The characters are fabulous and wacky, and the level of detail with the technical aspects of the production are, as always superb, and what I've come to love and expect of this studio. I don't even want to know how long it took, but it's beautiful, and is the kind of film I'd like to watch again in the future.

This is feel-good fluff and swashbuckling fun, and if you're looking for a way to while away a bit of your weekend and finish with a smile, then this one's for you.
Posted by nerinedorman at 4:35 AM